THE ASSASSINATION OF JESSE JAMES
THE UNDERTAKERS, SALOON AND NIGHT INTERIORS
Looking at Lighting

The shots of Jesse James in the Undertakers were made to match some photographic references we had. We didn’t have a set and we really didn’t need one, as the idea was to have a very controlled pool of light. This was achieved by constructing the 10” x 5’ soft box as shown in the drawing. The box was rigged horizontally so that the light across Jesse’s face would be quite soft and there was a 2’ ‘snoot’ that blocked the light from the backgrounds. The soft box was rigged on a simple block and tackle system so that we could change the height quite simply. I remember the ceiling of our warehouse space was pretty low so this wasn’t much of an advantage in the end. I remember we did lower the rig for the one shot where Jesse appears in the reflection of the camera lens as this built up our stop and also isolated his image that bit more. 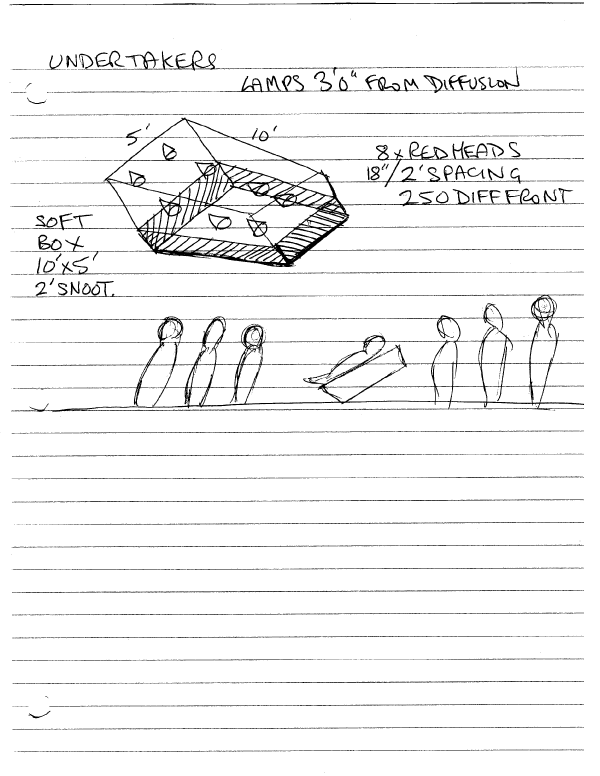 Lighting Plan for the Undertakes sequence

Apart from the train line we shot a number of interiors at the Museum Park in Edmonton, Canada, as well.

WS of the Topeka Exchange Saloon

The Saloon was really a quite a simple set up but, for me, making the decision to go with one large soft source through the window was the key. I was a little nervous about this, as the set was quite deep. Another obvious decision was to use a little atmosphere. 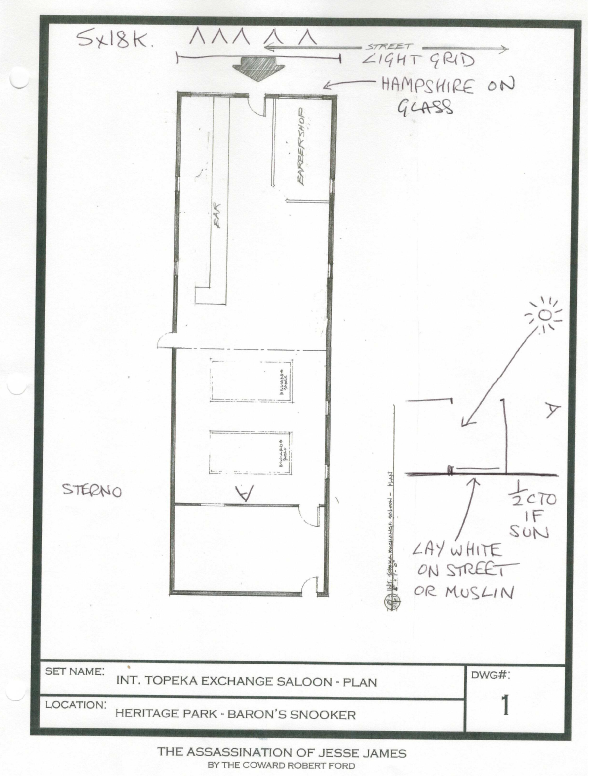 Some 25’ from the window we had a row of 5 x 18K HMIs on stands. Between them and the window is a large frame of Light Grid diffusion whilst there is Hampshire frost on the window itself. I also had white muslin laid on the ground between the Light Grid and the window as I felt the sunlight would illuminate this and soften the whole effect. We were in for a few days of uninterrupted sunlight so this seemed to make sense. The sunlight hitting the diffusion was not a problem but we did need some overheads to cut the direct light off the Saloon window.

Every shot we were making here was always intended to be part of a voice over montage so we went for our special lens vignette effect, which we had decided on for these sections.

I have been asked in the forum for a little more information about this night interior scene between Brad Pitt and Sam Rockwell. I don’t have any diagram for this, as it was something we just worked out on the day.

One of the key decisions we made during prep was that we would use period ‘hand made’ glass on the windows throughout the film. We were keen on this because of the rippled effect this gives when you are shooting through it but also because of the same effect when you project a light through it. The closer the lamps are to point sources then the stronger this effect becomes.

CU of Charley with rippled effect

Consequently I was using open eye 1K Fresnel lamps, which is just a regular Fresnel without the lens. There are usually two lamps playing on any one shot, one that creates the pattern on the background wall and another for the character light. For the profile and medium shots posted below, I had a third lamp to give a little brighter edge to the character. When lighting with direct sources like this I sometimes use a 2’ x 2’ polystyrene or lose muslin bounce to bring a little soft light into a face. On a wider shot I might use a silver stipple covered board when the white is not sufficient. I might add a special lamp for this like an Inky but I try as much as possible to use the existing light rather than add something separate.

All the lamps were cooled down with a half blue or a quarter blue gel and the negative was also printed a little colder than exposed. I would have used a deeper gel but I would have been struggling for exposure if I had.