Team Deakins converses with sound designer Mark Mangini (DUNE, BLADE RUNNER 2049, MAD MAX: FURY ROAD, STAR TREK) about the world of sound. In this episode, Mark explains that his job is to tell stories with sound and to create universes that sonically don’t exist. He walks us through designing the sound for the war rig in MAD MAX: FURY ROAD as well as his close collaboration with director Denis Villeneuve on BLADE RUNNER 2049, and Tom Holkenborg on BLACK MASS. We discuss how Mark decides when to use a music cue or sound effect cue, how you can earn loud sounds by buying silence early on in a film, and the creative necessity and financial incentive to capture production sound on set instead of recreating it in post. We learn a lot in this episode!! You don’t want to miss it!

You can listen to Mark's episode here! 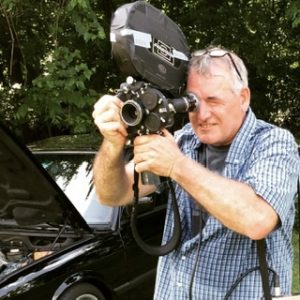 I really enjoyed this conversation and Mark provided some great wisdom on not just sound design but on planning for and capturing sound and how it can impact story or emotion or feeling.  I accidentally found this out on my first production for BMW motorsport when the only time I could get to interview drivers was in the pits when it wasn't their turn in the car.  Obviously,  when cars went by or came in the pits it was loud and my subjects reacted to it. I had no choice but to embrace it and they loved it as it sounded so real,  the sound was the emotion. Like so many things, I'd accidentally stumbled on something that worked and it's led to over ten years of work, some of it mostly audio based. Who knew there was money in producing exhaust videos? BTW,  dynamic mics are best and it's like recording drums or bass in music but I usually use four different mics. So much for my small world.

As for Sergio Leone,  he worried more about sound design than most but more interestingly sold his stories on audio. I love this little Italian documentary where it is discussed around 1:40ish

The Byre
1 week ago
The Byre 1 week ago

Even when I was in the military, I took a recorder with me everywhere.  I even parachuted with a first-generation cassette recorder and was arrested in Singapore by a local military police patrol for crawling through a swamp with that recorder as I was recording a rare frog.  Our OC explained that I was mad, so they let me go!

When on patrol in Northern Ireland, a bomb went off near me in a Morris Minor and the trunk lid flew past me and as it did so, it vibrated and gave off the most amazing doppler effect as it flew past my head and I remember thinking "Damn!  I should have been recording that!"

One of the greatest sources for sound FX is the human voice - you can speed it up, slow it down, double it up or add elements to FX that are only just audible such as adding a tiny amount of an agonised scream to a thunderclap - that can also be done with the mouth and slowed down with other elements added from either library sound or just about anything!  The audience cannot hear the scream embedded in that sound, but they feel it.  It becomes a different type of thunderclap!

Sadly, Mark didn't tell us how he got some of the sounds in BR-2049, but for my money, it is the best sound design I have ever heard in any movie!  I haven't watched it now for about a year, so I shall treat myself in the near future!  The unbelievably immersive sound design is the first thing I noticed when I first saw it.

Wives of sound people have to be especially understanding.  When we were watching a movie with a scene in a cavern, I remember leaning over to my wife and whispering "Lexicon 960L, Large Church preset!"

She just laughed and just shook her head.

Needless to say, we have a large 7.1 Genelec system for our home cinema.

Mike replied to Eyelights in No Time To Die 2 hours ago “No time to die” JB lighting effects.

Mike replied to Eyelights in No Time To Die 2 hours ago I have not seen the film but there are many ways t...

Sjoerdwess started Eyelights in No Time To Die 10 hours ago Hi everyone!
I've done a bit of research on...

dmullenasc replied to 'Truth' in Analogue Photography 10 hours ago Street photographers of the past shooting film hav...

Roger Deakins replied to 'Truth' in Analogue Photography 15 hours ago You have to be ready when the moment confronts you...

Roger Deakins replied to Finding My Voice and other advice 15 hours ago I'm not sure what you mean by 'combing t...