← Forums
← Back to Still Photography...

“Ozzie” Morris is on the right of the General. He piloted army High Ranking staff to Crimea to finalise the WW11 hostilities. Although he is still serving in the RAF, he and co pilot wear white civilian aviation overalls, on the left In white are the navigators who also flew with him.

His strength of personality can be clearly seen, his hat is on straight, his white overalls are pressed down to his gaiters and he stands upright for the photo. He wants to impress others and is a credit to his squadron. Photo was for International press.

Aircraft is an Avro York, owned by Freddie Laker (once my boss) passenger version of the Lancaster. These aircraft were part of the Berlin airlift to help save Berliners from starvation. There should be a film about that. 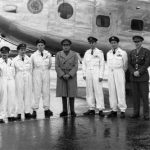 G.C. replied to Variable Electronically Diffused LED Panels 22 mins ago Hello, The Rotolight Titan is, to my knowledge, th...

Roger Deakins replied to Skyfall Bulbs 10 hours ago I'm not sure why you think the highlights had...

Mike replied to Culloden lensing 1 day ago Vanniyan, Would this help. Focus puller reacts to ...

Roger Deakins replied to sky fall protagonist vs antagonist 1 day ago All ideas are valid. Try it out for yourself and m...

Roger Deakins replied to Culloden lensing 1 day ago Monitors only came into being relatively recently ...

Vanniyan replied to Ken Loach 1 day ago Yeah we can ask him about modern audience taste ab...

Mike replied to A young Sir Roger on set with Gary Oldman 1 day ago  Location shots, perhaps Roger could identify the...