Creating Smoke/Fog without a machine (6 replies and 12 comments)

Hi Roger, just wondering if there is a way to create smoke that can be pumped into a room with the usual Glycerine/Water technique?

I seem to remember seeing a documentary about the making of the original blade runner with the scale model sets filled with smoke from bottles that looked a little like a squeezy bottle's nozzle, but I might be mistaken.

Anyhow, I was just wondering as it would be a really efficient way to create haze without the use of a smoke machine and power/heat if it was a compressed thing or something like that.

Any ideas or experience of DIY Smoke in a bottle/can?

Thanks in Advance. /Seán

I should say without the usual Glycerine/Water technique...

There are even more health and safety rules these days and be very cautious when experimenting with haze/smoke machines, make sure your public liability insurance is up to date as smoke machines of any type may cause respiratory issues to your crew or viewing public. If you are in the U.K. try speaking to ‘Agog Vivid’ smoke effects specialists. Make sure you are protected.

hi Mike, completely agree with everything above. I'm in Ireland, we do have our own small smoke machines, but they can be quite overpowering (and also some dp's like making their own fog juice that is quite strong and stings the eyes, etc). This is more of a curiosity to be honest as there is a wee aspect of a new show I am producing that requires haze/fog and I don't think it needs a machine, just a few sprays of mist or something should be enough, but also the need for power and heat creates a lot of risk too, and restricts how far you can get the smoke in. It might not be possible at all to be honest, and I am not going down the chemical route at all - especially as many chemicals can't be purchased here in Ireland without a specific license anyway (anti-terrorism laws influence that one). Appreciate your input though 🙂

In the old theatre days they used to burn wet clothes on stage to create steam or smoke effects and sometimes even old rubber for extra smoke but in those days there were very few rules to protect the public. There are many ways to create smoke but doing it on stage or a set is very tricky. There is always somebody who will blow the whistle and make a case out of it. I know what you are trying to do but putting it in print is not wise. A high pressure spray may be the answer here but that won’t last long perhaps a small smoke machine use gently may create the effect you want. Let us know how you get along with your show and what method you eventually used.

jaysus, burning anything is not the way to go at all, sweet motha!

Smoke in a can? Might see if that exists, it's a scale model set, so a machine seems pretty overkill to me, but we'll see how we get on 🙂

Many years ago they used to sell “Scotch Mist” in a can. Perhaps smoking a ‘King Edward’ cigar and blowing it through a long straw, running the camera at a higher FPS will do the trick. Just have to keep experimenting. Good luck!

Scotch Mist, gonna look that up.

The cigar idea is very cool, but we don't allow smoking or any exposed heat source on set, I don't smoke myself, but in a very tightly controlled set not using any flammable or easily flammable materials, the straw and smoke idea would be amazing to try.

Already tested our smoke machine and it is very heavy and uncontrollable, meaning the whole room is saturated in fog, instead of just one small piece of a scale model on a table. The shot is an establishing one, wide, showing a whole valley with water and trees and fog coming through the trees, pushing in to a CU on the trees. Will see about that Scotch Mist, that is exciting

Prices for a small haze machine start at €69 and you can adjust the level of haze required.

As Mike says, I would steer well clear of experimenting with other chemicals, as people get very upset if they think that they are having to breathe in smoke of any sort.

thanks Byre, already have two super smoke machines, but that's not what I was asking 🙂 Appreciate the effort though.

My technical mind is more curious on this than anything, the answer may very well be, it can't be done without a heat source, pump, fan and nozzle. I just remember seeing the doc from Blade Runner's making and thinking when I seen the smoke coming from a bottle, or it may have been a compressor, not sure, that it was very efficient looking and allowed a person more control over the addition of smoke to a scene, not so much, 'how can smoke be added', more what were those bottles they were using on BR set 😀

It was myself that said steer clear of chemicals, they're not available here anyway.

btw - we got our two smoke machines (identical to the link you sent) for €39 each from gear4music. a few years ago. They always have great sales and deals, and they're a UK company if I'm not mistaken.

I assume this is the effect you are trying to achieve. All depends on the scale of the model for it to look authentic. 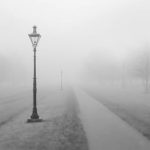 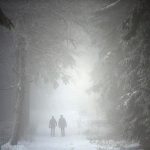 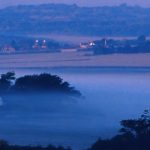 Hi Mike, apparently my reply didn't post last time. But you are very close with those images, albeit as you said it is to scale, so the amount of smoke is important, don't want to smother the set and drown it out so nothing left in image.

I found a few sites selling haze in a compressed can so we have that to work with. Still curious as to what the handheld spray smoke canisters were on the 1982 Blade Runner though 😀

Most of the atmosphere in 'BR 2049' was done with misters, in the same way as they use fine water sprays at some Vegas restaurants. The result in a sealed stage is to create fog. Of course we also used smoke machines as well.

I see, misters, ok, guess I will have to try a few different approaches. We do have a sealed studio for the model, will have a go at trying a few approaches based on the Mister method and also going to try the Haze in a Can, it's only a very small section of about 5ft wide x 3ft long and it's really only a small model on a table about 2ft tall. Really appreciate everyone's input and help today. Lot's of ideas to work with now 🙂

"it's only a very small section of about 5ft wide x 3ft long and it's really only a small model on a table about 2ft tall."

the foil duct is a great idea, might see if that works too as it means we can leave the machine on another surface and let the smoke drift onto the model section.
Really pleased I posted this question now as we have so many options to work with now.

When I was still working in a theatre, we were also constantly dealing with fog machines, dry ice etc.
Through a colleague I came across an old method, which was a real discovery:

"SAFEX® FOG SALT is the modern version of a fogging agent made from high-purity raw materials, as it has been used on stages worldwide for almost a century.

Today it is practically only used to produce a fine, almost invisible and permanent atmospheric haze. Fog salt is not suitable for stronger, smoke or cloudy fog effects, these can be produced faster and more comfortably with fog machines and fog fluid.

Due to the small amount required, the comparatively high threshold value and the pharmaceutically pure raw materials, the haze produced with it is harmless.

The salt is sprinkled onto an electrically heated (cooking) plate and evaporated by heating it. The vapour produced is incombustible and fragrant!"

Here is an older testclip where I used this. The use was already a long time before the recording, but you can still see the subtle effect in this large room.

A much more intense effect can also be created shortly before recording.
A great thing, all you need is a mobile electric hotplate.

wow, now that's something I've never heard of, thanks so much for pointing us in this direction. I love learning new things and this seems like a great option. The video itself you linked to is very cool and appealing aesthetically. Cheers again 🙂

Wouter replied to Applying ND to car windows 9 hours ago expose for the face if a window is in the backgrou...