This question is as much for Roger and David as for everyone, I'd like to know as much opinions and experiences as possible.

The question is basically how many shots is the average per day in a profesional shooting. I know it depends a lot so lets say is a simple drama with no technically complicated shots and shot on location on a house but there are a few shots outside the house so there's exterior and interior.

I guess it also depends on the style of lighting, while people like Roger like to "light the scene" and create an atmosphere, there are more classic ways in which a different a kind of lighting is used for every character, shot value, etc and it will take more time.

Yes, the number of shots you shoot in a day is so dependent on the situation. How much time will be taken with rehearsals for the actors and with blocking etc.? Are you shooting with a hand held camera, as is the case on the recent Russian film, 'Compartment 6', or is your film more 'classic' in its camera style. The great cinematographer Douglas Slocombe would say 5 shots is plenty. I like to think I average 15 or so, but it could be 30 or it could be 1.

Thank you very much!

“Compartment No 6”, now that is an intriguing film. 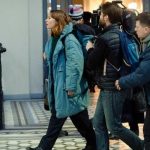 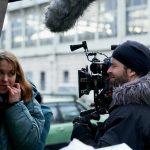 That is interesting. I never would have though 'Compartment No 6' was shot on film. I wonder why they chose film when they were shooting in such extreme lighting conditions. Pretty good hand held work with a 435!

Roger, would you have ‘faked’ this shot rather than suffer extreme  temperatures for all the crew. I know you have filmed in cold snowy weather. 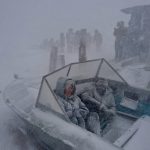 As Roger says it all depends on the nature of the set-up plus the time spent outside of the set-up, like for rehearsals or shooting takes. You could knock off a lighting/camera set-up quickly in ten minutes and then have the director spend an hour shooting takes, especially if it is a long take with a lot of complex elements happening.

Someone once told me while working as a day player on a complicated submarine movie -- maybe it was "Hunt for Red October" -- he overheard the AD yelling "we have to make our 1/8-page day!!!"

In his book on the making of "The Emerald Forest", John Boorman said he felt that one set-up per hour was realistic, or 12 set-ups in a 12-hour day.

But often we don't have even that luxury, I've had directors show up with a shot list for 60 set-ups, but that's on multi-camera days. For single-camera shooting, I tend to feel that any list over 20 to 25 set-ups is going to be a real challenge. But I'm talking about typical dramatic interior scenes with a few actors. But it really just depends.

Thanks!
The reason why I asked about this topic was because I was having discussions with the director of a project we will shoot at film school (on which I'm dp). It is a short film about 7 minutes long and we have a 10 hour day to shoot It. The shots themselves are not complicated in movement and they're not very long. What scares me is that location is at 1 hour from school so we don't really have 10 hours to shoot. Plus, there are scenes inside a house and also in a wheat field. The director told me she doesn't think she can do it with less than 20 shots and 4 or 5 of the exterior ones have to be during magic hour...
I don't know how do you see this... I would be calm if it was in a documentary style but she wants the camera to be more "classic"...
I guess we'll have to rehearse a lot the weeks before shooting and even shot the short film with a cellphone or something so that the day of the actual shooting we don't take too much time deciding the set-ups. Any advice on that?

Lighting wise I want to go for a realistic-Nestor Almendros kind of look, so (I hope) we'll not take too much time re-positioning lights between shots

I have heard good mouth talks about 'compartment no 6. I need to watch this movie. But there is no any online streaming on Internet. Roger did you watch that movie on dvd? Or special movie show?

It was featured in the recent “British Cinematographer” magazine. I don’t think it’s been released yet although a friend of mine who works for ZDF in Germany had
seen it. Perhaps somebody will update me.

Roger Deakins replied to Colour in movies. 9 hours ago There are conscious color choices made and there a...