So whose career is on the line if the entire project fails?  Yours or the DoP?

It's supposed to be a team effort, but there is a team leader who makes the key decisions - and that is the director.  Or at least, it is supposed to be!

Imagine Roger turning in this shot and the colorist deciding it would be better blue instead of orange... I can't imagine Roger saying "hey, it's not my responsibility any more, do whatever you want to my photography!" 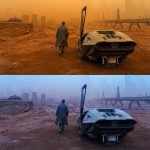 CountGiger replied to Looking for Chinese speakers 9 hours ago Hi James!
I'm an undergraduate student in the...

Nareg.A started Do you watch films when youre in the middle of mak... 19 hours ago Hey Roger,
This is a weird question to ask but, ...