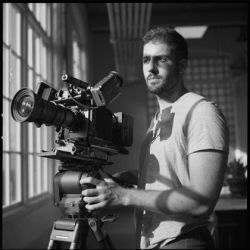 I was listening to your talk today from the ICFF Manaki Brothers in 2018. You had briefly mentioned a specific post-process you did for The Assassination of Jesse James by the Coward Robert Ford, but didn't elaborate on it. It was brought up after you mentioned 1984 was a bleach bypass, but then continued to say you did some sort of other interesting procedure for the Jesse James film.

What was the process like for the negative after shooting for The Assassination of Jesse James by the Coward Robert Ford?

Thank you so much,

We did a partial silver retention on the camera negative for 'Jesse James" and in the DI we introduced some red into the blacks. We did consider pre-flashing the negative with a warm light, much as I had done on 'A Beautiful Mind', but I felt it would be a little 'dangerous' to do it in this case. Besides, we found the DI offered a more cost effective way to create the same look.

Thank you Roger! I will look over the film again with this in mind next time. Have a wonderful day!

aneesh.kumar replied to Query about video quality. 14 hours ago Quality looks fine.  Maybe you could have shot th...

dmullenasc replied to Query about video quality. 18 hours ago It looks fine, sells the product, is fun, etc.
The...