I recently got back into celluloid after having a lot of bad experiences with Super-16mm in film school and, even though I'm shooting on a still format that is larger than 15-perf IMAX, I am still seeing noticeable grain across my image at all brightness values and in all colors. There is a visible patina across the entire image. (A recent lighting test* is attached with detail crops)

When I watch 4k releases of movies shot on formats as small as 2-perf S35 film they appear cleaner than my images, even though I'm using a format with over 16x the area.

To get clean images, should I turn to:

P.S. I've worked with S35 film cameras on shoots in NY and LA, but always as an AC or PA, never involved in the processing, scanning, or color grade.

*I shoot Portra 400, which (somehow) incorporates Vision 3 technology, in 6 x 8 (56mm x 76mm) at 400 ASA. For this test I shot at a stop over, at proper exposure, and a stop under all on the same roll. This image is the exposure I want with the colors I want, but all exposures have too much grain. The film is developed my local lab and scanned by myself on a flatbed scanner. Apparently their development process is all automated with Fuji chemistry. Even samples from other photographers shot on 6x6 Portra 160 and other 100 speed negative film stocks show noticeable grain. It's missing the clarity, smooth tonality, and resolution I see in big budget movies shot on film 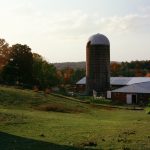 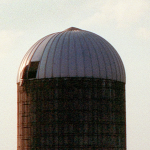 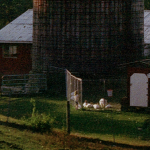 The jpeg compression is removing a lot of the grain in the examples above, but the idea is that the detail crops (the top and bottom of the silo tower) are supposed to have the same resolution as a Super-35mm still frame. I'm expecting the resolution and grain structure of a 2k Alexa Classic at 1600 ASA in the cropped images

Portra 400 is a somewhat softer and grainier film but perhaps overexposing and pull-processing it would smooth it out for you, or just overexposing it a little more, though with some scanners this causes noise (not grain) in the highlights since that is the densest parts of the negative.

A point light source in a telecine or scanner can have the effect of "sharpening" the grain, perhaps try scanning it on different devices to see if that makes a difference?

A little grain/noise reduction might be all that you need. It doesn't seem that bad to me in what you've posted.

Thank you for your response. I'll incorporate your feedback into another series of tests on a finer grain stock in the product line (Portra 160) pushed one stop in exposure and pulled one stop in development. I'll also try a drum scan to pierce through the highlight density and provide a cleaner image overall.

By my eye, viewing the uncompressed version of this photo, I would say that it's easily an HD/2k image, but I was under the impression that such a large negative would yield a much higher-resolution result than what I got. Maybe the static nature of a photograph makes me more sensitive to grain than if it were shimmering across the image at a couple dozen times per second.

The purpose of these tests is to understand how and when to introduce these photographic qualities and process artifacts into the picture to support my intent. I appreciate you taking the time to help me learn.

simon m replied to Opinion about color correction 4 mins ago You could use a qualifier and try to create a mask...

Reese Brucker started Episode 84 - MATTHEW LIBATIQUE - Cinematographer 27 mins ago We speak with Matty Libatique in this episode. In ...

Mike replied to Opinion about color correction 42 mins ago Compromise of the two.

Mike replied to Opinion about color correction 46 mins ago I prefer the first one as the light on the second ...

Vanniyan replied to American Beauty dance scene 1 hour ago It was shot by Connie. Not roger. Seems like you a...

Jacob W. replied to Any advice for getting better handheld shots in th... 4 hours ago Maybe try constructing a DIY steadicam? Thats what...