I just watched the 'ARRI Interview: The immersive camera movement of “1917”»' and I couldn't help noticing that in one of the b-roll cutaways there was a shot of a monitor whilst you were shooting the bunker scene with General Erinmore. The monitor was displaying that the colour temperature of the Alexa LF was rated at 3000K. I thought this was interesting as this scene seems a lot warmer than what I would've expected a 3000K rated camera shooting dimmed 500w bulbs at 25% to look like. I know that a bulb is a lot warmer when dimmed etc, but considering the light output of the 500w bulb at 25% I was just wondering, did it really look that warm on camera/in person? And if it didn't, why didn't you rate the camera at 3600 or 4000K to make it warmer, for example?

And on the subject of dimmed bulbs, how did you (or John) manage to find bulb's that didn't hum when dimmed? Or is it due to the type of dimmer that makes the bulbs hum? (I recently bought a 300w E40 bulb, but when dimmed to 25% ish it has such an audible hum I can't really use it on set, unfortunately) 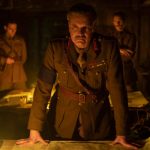 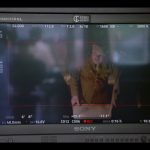 Mark Weingartner has a good explanation here about the differences between a variac and a typical household triac dimmer: https://cinematography.net/edited-pages/VariacsvsDimmers.htm»

Thank you for this David, it all makes sense now!

Sometimes a bulb will hum but, quite often, you can just gently tap the bulb and the noise will stop.

I think I set the camera to 3000K because the lamps felt a little too warm when they were dimmed. There were two bulbs in each of the practical lamps on the tables and no one bulb was ever set at the same value as another. The intensity of each varied across the length of the take depending on where the camera was looking. As the camera moved the high of one bulb was probably near to 25% but the low more like 10%. I would have rather rigged two 250 watt bulbs than two 500 watt bulbs as I knew this would lead to a problem of balance between the color of the lamps and the heat they would produce. As I was spraying the glass chimneys of the Practical lamps it was crucial to keep the heat down. I have frequently used 250 watt quartz bulbs for similar effects when shooting in the US but I couldn't find the ones I wanted in 240 volt. In the end I felt it was simpler to stay with the 500 watt bulbs and dim them way down even if it meant the color was a little 'rich'. I did, of course, do numerous tests beforehand.

Interesting that they felt too warm. I thought they wouldn't have been warm/rich enough for the wattage. I imagined you'd need at least a 1000w bulb to get that amount of light at that warmth. I assume this is why you used two bulbs in the lanterns?
On that note, how did you manage to fit two 500w bulbs into the lantern? I imagine for the wattage they would've been E40 bulbs or something and they're not exactly small the 500w ones I've seen... Also why were the two bulbs set to different intensities? And why would a 500w bulb lead to a problem of colour balance and not a 250w one? Apologies for all the questions.

When you do use a quartz bulb what do you put it in? Or is it just bare in a quartz lamp holder? 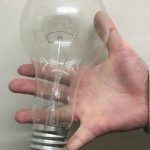 The two bulbs were set side by side and the one facing camera was always less bright than the one facing away. I sometimes I put a strip of metal between the two so that the bulb doesn't flare the lens, which is something that happens when you are lighting a dark scene with just a small hard source. They were not the standard bulb of the type you picture but FEP or T28 projector bulbs, just like the quartz halogen bulbs used in a Fresnel lamp.

Genious. Like a magic trick, it seems so obvious once explained. Did you at all have to correct or balance out the two bulb's colour temperatures in the grade as they were at different intensities?

They were so close together that you never were aware of it being two separate sources. That was also helped by the spray coating we put on the glass chimneys.

The Byre replied to The Dude abides 2 hours ago You have inadvertently touched upon the whole subj...

Anca started Working with the Set Designer 3 hours ago Hi Roger, I would like to know more about the rela...

Hans replied to The Dude abides 6 hours ago The film is called 'The Big Lebowski' of...

Hans started The Dude abides 6 hours ago If you haven't seen 'The Dude'. Now...

Benjamin replied to 'The Irishman' 11 hours ago Fair enough! And how did you feel about, 'Onc...

Benjamin replied to How are you spending your shelter in place?... 11 hours ago Since you've been spending so much of your re...

Benjamin replied to Newsletter 11 hours ago I haven't received it yet either, but patient...

benja replied to OTS - Framing 14 hours ago Thanks!

benja started OTS - Framing 14 hours ago Hi Roger,  I was looking at the way you frame OTS...
Top Forum Posters

MickGrow
23
Do NOT follow this link or you will be banned from the site! Scroll Up