Hi Roger,
Can you please explain how you lit this close up? Was it lit with tungsten? It seems as if it was warmed in post: shot with 3200K lamp but balanced in post as 5600K. But her eyes, hair, clothes seem less saturated (more neutral). How is this effect achieved?
I tried to create a similar effect, but when I dial up the Kelvin to 5600K the skin tones are similar, but eyes, hair etc. are too orange.
What also puzzles me is the kind of lamp you used. It seems soft horizontal, but sharp vertical judged by the shadow of the eye lashes. 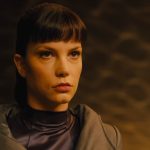 At this point in the shot LUV is being lit by a series of 12 lamps which are chasing around a large ring of such fixtures. These are 300 watt Betweenies and each is dimmed down with the ones on the outside of the row almost off and the ones at the center of the row at about 50%. This is why the light appears more soft in the horizontal. By running the lamps at this low voltage the warmth is created. It is done in camera and not a post effect.

There are 12 lamps 300 watt tweenies of fixtures. You talked about three rows of lights? Each circle had three 300 watt betweenies? Or something different from guess.i am wondering your explanations.

You talking about the same principle ring light fixture similar like this one used for blade runner shot. 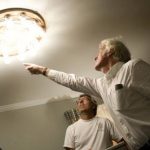 Yes, that is the principal but the largest ring was 32 feet in diameter. there was an interior ring that was a little smaller but it was the larger ring which was the main driver of the effect. I was saying that 12 lamps were on at any one time at the beginning of the scene. That is 12 lamps out of a rig containing 280 lamps.

I will post a lighting plan when I get a chance.

Can i get similar soft wrap light when I use 2 nos10bunch kinoflo tubes rows.

Thanks Roger, the lighting plan would be great to study. I'm also interested in how you created the beautiful water reflection effect on the walls in the same scene.
I know you often dim tungsten lamps to get a warm effect, and it does look beautiful. But – when shooting raw – wouldn't you get the exact same effect just by sliding the color balance to the warm side? Of course this could only be done in a studio environment with all light sources being of the same kind and temperature. Or am I missing the point of dimming the lamps on the outside of the row more? (I probably am)
The advantage of creating the warmth effect in post would be a stronger blue channel, which is struggling at these low color temperatures.

JH replied to Technocrane Usage in Studio 16 mins ago Thanks Roger - good to know!  Any chance you&#039...

Roger Deakins replied to Technocrane Usage in Studio 20 mins ago Be careful, the Trinity is not a rig that is commo...

JH replied to Technocrane Usage in Studio 4 hours ago Many thanks for those thoughts Roger - that's...

Roger Deakins replied to Denis Villeneuve movie 5 hours ago 'Incendies'. It is brilliant.

Roger Deakins replied to SDR and HDR versions of 1917 5 hours ago My! We did so many versions I have to say we did s...

Roger Deakins replied to Technocrane Usage in Studio 5 hours ago I would be careful about being locked into one pie...

JH started Technocrane Usage in Studio 10 hours ago Hi Roger -  Just wanted to say thanks again to yo...