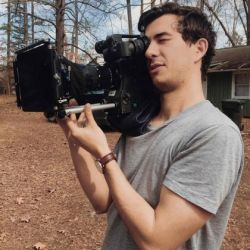 I am currently prepping for a film school thesis film, and I wanted to know if anyone had some suggestions to approach a late evening bedroom interior that is supposed to take place on July 4th - actual shoot will be in mid- to late-March in Florida.

I want some direct sunlight to come through the bedroom's window - the thought being that the sun is close to setting - while also having enough of an ambient push through the window to bring up the overall exposure in the room.

Biggest light units I have at my disposal are some tungsten PARs, 2K fresnels, a 5K LED Fresnel and a 10K LED Fresnel (though the LEDs never seem to quite give me the output I expect them to, especially when bounced and/or diffused).

I have a testing day coming up and would love to hear if anyone has any suggestions that I could try out in addition to the plan I already have in mind. The actual scene will most likely be shot during night-time, so I will have to create everything artificially.

Trick for seeing the light better in a set: Atmosphere.

Find out how to get a small smoke or fog machine on your set and get some "Atmo" in that room. That will help you see those striking beams coming through the windows. As far as the lights you've listed I don't have the expertise to know what you can and can't do with that.

But for a test day the smoke will be a game changer. Doesn't have to be heavy, but just a nice little thin even layer will help reveal the light.

Hope this helps and BEST OF LUCK.

Lighting is dependent on the location, and without pictures the advice can only be of a more general nature. Also, the following advice is really my taste.
First, I think your approach to light through the window with both direct and soft light (whether bounced or diffused) is sound.

In real life, sun comes into rooms at various angles, and rarely the most perfect one, raking on the back wall for example, or reaching deep into rooms. I would try to find an interesting angle for your sun, but not necessarily the perfect angle –in fact, maybe a very imperfect one– and then shape it like you would with the sun. I like using layers (Opal or Hampshire frost on a 4x4 frame outside to simulate the haziness of end of day ; maybe that goes through a cuccoloris and then glass and curtains for example. That’s an extreme example, but the point is that it’s OK to waste lots of light when simulating the sun to give it the proper quality. I would start with the 5K LED (I’m assuming you’re referring to the Mole LED) gelled in tungsten with a “bit too much” CTO. Then you can supplement it with Source Fours inside for local splashes of light, or bounce, gelled to match the color.
Once you set your main light, it will be missing some ambient, and for that I would bounce the 10K, at a cold color temperature (6500K or above), from outside the windows. The idea behind using the more powerful source to bounce is to give you a fighting chance against the 5K in direct. If you have room to work outside and the room is small, this might be enough. An alternative is to bring in a soft source inside and lift the ambient level from the window side. I would add a bit of magenta to emulate the sky color.

Thank you both for the great inisghts!

@G.C. I’m assuming the extension of sunlight with the Lekos only works if you don’t see the window itself, or hide the Lekos out of frame on the ceiling somehow?

Would you also mind sharing your approach to building a soft source from inside?
I struggle sometimes to build a soft inside fill/ambient that’s not too directional.

I will definitely try a combination of these during my test!

For the lekos, sometimes you can totally get away with having them inside with the window in shot, and other times the difference of angle will show too much. Sometimes you can have one outside the window to highlight a specific part of the interior. I’m purposefully a bit vague here because it really depends on the situation and the shot.

Regarding the ambient light, I mean, the absolute best to be naturalistic for me is to still push in ambient from the outside. This involves usually some sort of bounce (could be muslin, which comes in blue by the way...) at a clever angle right next to the window; and an HMI pointing up. That is directional, yes, but in a good sort of way, I think.
However that’s not your question and you want to supplement from the inside. Ok, the other thing I like to do is bounce a joleko (yes more ellipsoidals!) right above the window (or even at the top part of the window if it’s not in shot, so it can even bounce some of the curtain color). However, that had to be controlled because you can quickly fill up the room. Depending how bright your walls are, you might need more or less negative fill (probably more) and flagging.
Europeans like to use Joker softtubes above the windows, or for less output: Kinoflos, or more recently the SL1, or maybe a Litemat; they’re all good sources. Usually, egg rates on them.

I think what’s important is not as much that it’s not directional but that it’s soft enough and coming from the window side, or the top because the brain tends to read soft top light as non directional. But in a normal interior I feel there is always directionality to the ambient light and it can be good to embrace it.

@G.C I’ve been trying to conceptualize how you would place the Lekos inside to extend the sunlight while still seeing the window haha.

Great insights, thank you!
I will give the Leko bounced above the window to increase ambience a try during my test!

simon m replied to Opinion about color correction 21 mins ago You could use a qualifier and try to create a mask...

Reese Brucker started Episode 84 - MATTHEW LIBATIQUE - Cinematographer 44 mins ago We speak with Matty Libatique in this episode. In ...

Mike replied to Opinion about color correction 59 mins ago Compromise of the two.

Mike replied to Opinion about color correction 1 hour ago I prefer the first one as the light on the second ...

Vanniyan replied to American Beauty dance scene 2 hours ago It was shot by Connie. Not roger. Seems like you a...

Jacob W. replied to Any advice for getting better handheld shots in th... 5 hours ago Maybe try constructing a DIY steadicam? Thats what...