Dear master roger suppose if sam don't want daniel silhouette shot then what was your approach for this shot. Because there is a bright sky baground. Approximately how much fire power need to balance the sky. For instance you want daniel figure exposed clearly with this same baground. 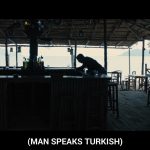 2. Whitehall Mallory's office. As per your lighting diagram you had put rows of 10k fresnel lamps at 12' beyond. But the window seems little vertical. Did you put 10k fresnel for each window glass. Do you remember how many 10ks were? I assume you had out All the light sources facing straight to. Windows. What diffusion did you put on window. 250? 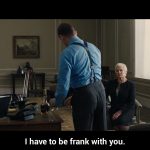 It would have made no sense to have Bond at full exposure when he is in the beach bar. What would I have done if Sam had wanted him at full exposure? I would have argued my case and, if that didn't work, I would have suggested shooting at dawn rather than at dusk, as we did. Shooting at dusk would have required a number of 18K HMI lamps, which we had no access to at this location, which was on the Mediterranean coast in Turkey.

Roger,
JB in the Turkey bar scene. How much ‘tweaking’ in post did you do to get that shot Just right. I thought it was in a studio. Can you remember what lens you used 32, 50 ? Great scene imo,

Roger, Is Mallory´s office only light with the fresnel outside the windows?You didn´t need a bounce inside the room or something like that?

The shot at the bar came in as you see it. No tweaking!

I may have used some unbleached muslin in Mallory's Office to catch some of the window light but, if I did it, it was without a lamp.

Thankyou Roger. No tweaking then.

Thanks for your reply roger. I need to ask you one thing. How do you compromise the production for lighting expense. Every producers surely ask why do you use 10x10k fresnel for this scene. How much important M and mallory conversation with windows baground. Apologizes me. Lighting details explain is cinematographer response or some other peoples response?                        some cinematographers don't change light much for close ups.  In this judi dench close up did you use additional light for wrap her face. 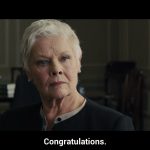 I did not use additional light for the close shots. 10K Fresnels are not so expensive to rent, certainly not compared with an HMI or LED lamp. Besides, production will usually do a deal for a basic package so, unless there is a particular heavy rig for a specific set, everything comes within that deal.

Hi Roger. Thank you for your insights into this scene. I am wondering why you chose to use that many 10K lamps. You mentioned that the art department added shears - were these so thick that it required that many lamps for exposure, or is it to do with the quality of light? I love the contrast ratio between Judi and the background and I'm wondering if the same could be achieved with say 4x 10K Fresnels or maybe even less?

The lamps were some distance from the framed diffusion so that they covered its entire surface. I might have used less than 10 lamps but it was at least 6 and I was shooting at 2.8.

Could I Have done it with 4? If I had shot at 1.4 but I didn't want to shoot wide open. The shears were my choice and they did not take any light away. They were very light so that they didn't act as the source. As I said, I wanted the framed diffusion to be the source so that there was some 'shape' to the way the light fell in the room.

Thank you for your reply Roger, very insightful.

Roger Did you mean it 5' beyond large grid cloth called framed diffusion?

Yes, the lamps were beyond the first layer of diffusion.

Madre roger why did you choose fresnel lamps for Mallory's office set. Again curious question from me why large grid cloth at 5 feet beyond? Did you use 20'x20' size diffusion for first layer and what is the reason 12' distance you had put the lights. I am sure it can't be pure intuitive. Its little mathematics! Could you explain me

Master roger Suppose if you want to be window become the source what diffusion you will use? In this case will you change the framed diffusion distance. It's about 5' beyond the window.

Roger Will you use HMI par lamp in this situation.

dmullenasc replied to LF on 1917 40 mins ago Think of it this way, if nothing moves, the distan...

Volker M. Schmidt replied to LF on 1917 14 hours ago Thank you very much for the detailed explanations ...

Al Duffield replied to LF on 1917 16 hours ago Would it be fair to say that small imperfections i...

dmullenasc replied to LF on 1917 17 hours ago However, I'd counterbalance that again by say...
Top Forum Posters