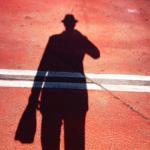 When Kate is sitting at the table and Alejanadro throws the pen and paper to her the light is really shaping the bone structure of her face really well. There is an extremely slow dolly in on both parties, and the light on Kate seems to require her to "find the light". If she moved her head to far to her left it would've cast a nose shadow onto her cheek. But didnt! How do you negotiate asking an actor to limit where the move from and to or do you go as far as to ask for their assistance? I did notice both she and Alejandro conserve their head movements in many scenes like this one which adds a lot of gravitas.

I was also wondering if your grips did anything special to create such fine and critical dolly movements here?

I don't think I mentioned the light to Emily in this case. I will talk with an actor sometimes but it all depends on the situation. Some actors would be distracted by a comment about the light and that is something that you need to be aware of.

The dolly move was just that, a Fisher dolly on some boards. I have been working with Bruce Hamme for 25 years and he is so good at these subtle moves. We had intended the moves to be complimentary on each actor but I noticed the movement has been broken by a slightly wider static shot which we shot as an alternative. Obviously this take was used for performance reasons.

Roger Deakins replied to NOPE - day for night technique combining IR Alexa ... 13 hours ago I think there are various options for any sequence...

Roger Deakins replied to BR 2049 lighting 13 hours ago There were two concentric rings of 300 watt Betwee...

sapozhnikovvn started BR 2049 lighting 20 hours ago Hello, Roger! Could you tell, please, how did you ...