Hey Roger, I know Lawrence Sher shot 'Joker', but I wanted to ask you something about this type of shot.

When shooting like this, against the sunlight, this will certainly need some lighting from the side the camera is pointing at the actor to properly expose the shot, right? So we don't end up under-exposing the shot. 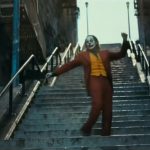 Not roger but this is seems to be 'golden hour'/sunlight backlight. It'd be impractical to say the least to try and lift the exposure of the subject with light sources.

The sky isn't exactly 'perfect exposure' it is a stop or so over. I don't believe there is a bounce in front of the subject either. If you look at the two overhead shots there is only two shadows one is a sharp shadow from the sun and one soft dark patch underneath him. At 1:30:56 when if there where a bounce in front of the subject 'camera side' there would be a shadow, there is none.

The only other light source which you can see from his waist coat is a soft toplight which I believe is just the rest of the sky creating a beautiful natural source.

So long story short, I just think it's natural light, quite nice as well. The two buildings act as flags, nice toplight and a back kicker. Partnered with ARRI's stunning technology.

However this is just a guess and I could be wrong.

Hmm, yes you could be right because one thing I did not think about is that the sun isn't directly facing the camera anyway. I am not sure though if just a bounce would create a noticeable shadow, wouldn't that depend on the bounce source size?

If you check-out the 'making-of' videos, the outdoor scenes seem to all have been done with natural light and an overcast sky.

Not sure what they use to light it but it was in a challenging location, steps between high rise apartments in NYC. Second photo shows step lights switched on. Interesting film. 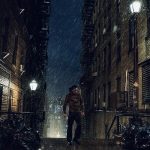 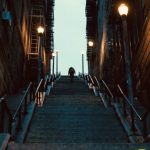 I think they're exposing for the actor and letting the sky be a bit blown out, at least in the original image I posted. In this one, nothing looks blown out? This looks like it's nearer to the evening?

Is it just me, but I see what looks like a power window over his face, reaching to the middle of his chest, and as wide as his shoulders. It's being used to raise the exposure in that area selectively. Anyone else see that?

Yes I was about to post that there’s a pretty aggressive power window lifting him a bit.

Original photo looks like a large reflector is being used.

sydneydan replied to Lighting Day interiors - Why choosing big fixtures... 7 hours ago Thanks a lot for the informative Answer 🙂

Mike replied to Finding your own style in photography 11 hours ago Lenkiewicz was famous for using lots of light in h...

Volker M. Schmidt replied to Creating Smoke/Fog without a machine 13 hours ago When I was still working in a theatre, we were als...
Do NOT follow this link or you will be banned from the site! Scroll Up