Attached are two screenshots from the film, questions: 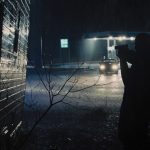 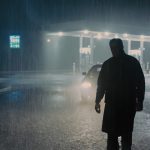 The screenshots are swapped for some reason while uploading. The first point is about the second screenshot.

The distance from the light source makes a difference to the way the light kicks in the rain and the 'rain' may have varied a little between the two shots. Otherwise, the lighting was the same, except for a 'special' that gave just a little light in Jake's face as he walks towards camera.

Super! Love the scene! Thank you!

I love the way you shot this film, Roger. I have watched it so many times. Lately, with no sound.

I think what makes Prisoners work is the motivated lighting that doesn’t exaggerate like Fincher’s Se7en. Prisoners exists in the real world and it’s the added realism that makes it so disturbing. I love the overcast look, I mean it’s in the heart of winter and it’s in the script, but that seasonal effect gives the film its somber tone.

Right! Not so easy to do in Atlanta in winter, which usually has clear blue skies.

skiphunt replied to Andrey Zvyagintsev 20 mins ago Watched 2/3rds of The Banishment last night. I did...

Roger Deakins replied to Andrey Zvyagintsev 36 mins ago Yes, it maybe an odd word to use but I would put t...

Roger Deakins replied to differences and elements of continuity between Bla... 44 mins ago The story-line. I did nothing to deliberately conn...

Roger Deakins replied to How much does the film look change in post? 47 mins ago That scene, like the rest of the film, appeared on...

Innokenty Vetkin replied to How much does the film look change in post? 2 hours ago Doesn't look too far to me besides motor bein...

dmullenasc replied to Learn 50's style direct lighting 3 hours ago Here’s the footage I was matching to, I didn’t...

Al.Ch started differences and elements of continuity between Bla... 3 hours ago Talking about cinematography and visuals, what are...

dmullenasc replied to How much does the film look change in post? 3 hours ago You can’t judge things by how they look in a beh...

Vigsod started How much does the film look change in post? 7 hours ago On the podcast Roger said that the look of the fil...

gazoobajp replied to Lighting for a car commercial 12 hours ago You're really outstanding. How can you find t...
Top Forum Posters