I feel like when I try to separate a subject from BG, my lighting starts to be sourcy sometimes. But when I watch your movies, I found that you rarely put a hair-light or back-light to make characters stand out but the subject still attracts my eyes! I also feel that there is not much luminance difference between characters and walls in your movie sometimes, like a couple of scenes in SICARIO (Example pic NO.1 )

Could you talk about how much extent of SEPARATION you usually prefer, such as the different stops between subjects and BG or FG? Which is your favorite way to separate a character from the environment? What is the meaning of Separation to you?

Furthermore, could you elaborate on the two screenshots I've attached?

In No. 2 pic, I wonder is the BG a real set that the Production Designer built? Or, it was shot by a green screen? How did you light this shot?  Did you put any lights on the protagonist? Did you do over-exposure and pull it down in the post?

In No. 3 shot screen, were you using yellow color to separate the protagonist who stands in a bluish area? Do you remember how did you choose the exposure point in the contrast shot?

Sorry for such many questions! But, I am keen to know how do you do these magics because I have never been left out in your images!  Thank you so much! 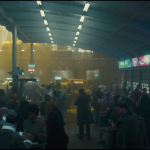 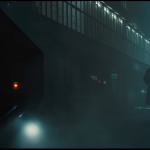 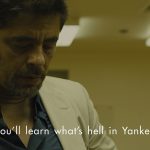 All three shots were made in camera with only small CGI elements such as a few moving signs in the first image and a light source and the trucks in the second image. That second image was made on the street in Budapest and we shot towards a large array of lamps fronted with an even larger diffusion, which was painted out in post. Both these shots employed a mix of effects smoke and misters. The third shot was made under florescent lighting with nothing additional added.

I appreciate it, Mr. Deakins. Can you talk a little bit more about how you usually see and judge the extent of separation? Do you measure it or just judging by eyes?

If there was no separation you would not be able to distinguish the character from the BG. A silhouette against smoky street lights is definitely distinct from the BG so there is separation.

Thank you! Anca. I was not saying there is no separation...It was definitely and perfectly distinguished in Roger's images. Maybe I unproperly described my feeling but I just wonder how Mr. Deakins judge the separation. And thank you for your analysis.

Separation can be achieved by color contrast as well as light and shade. You might want to take a look at the great portrait painters like Rembrandt, Whistler or Singer Sergeant if you really want to see how its done! I don't necessarily have a background darker or lighter than a foreground but I do like to see the shadow side of an object or character set against a brighter area of a background and the light side against a shadowed area of the background. Unless a character and a background is absolutely flat lit to the same light level you can always find separation.