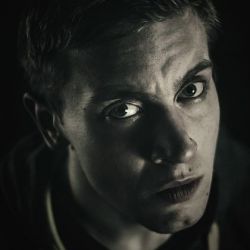 I have seen a few "behind the scene" videos from different movies and founded that a lot of cinematographers create much more flat image than final movie have.

Is it any reason to add contrast after? Maybe it create better blacks or something like that?

Should one up ambient light level on set/location to "compress" brightness range of scene to camera dynamic range?

How do you know that it isn't the BTS video that is flattening the lighting, rather the main feature that is adding contrast to it? The problem when you say that the lighting started out as flatter on set than the final product is what is your frame of reference?

Basically you are just seeing one level of exposure and applied display gamma versus another -- and the one in the final image seen in the theaters is the one intended by the cinematographer. The one used by the BTS crew is designed to show you what is happening on the set, so they opt for an exposure and then color-correction that is both brighter and flatter to show you everything going on -- there is no need or intent to create mood and atmosphere.

I have suggested, that BTS team's camera is more cheap than professional one on set, and should produce more contrast image with white clipping or deep blacks, cause the different of dynamic range and color process. But probably i'm wrong.

Thank you for the answer!

Ask yourself - if it is necessary to add more fill than seems natural and then add contrast in post, what about the shots in a movie made in natural light outdoors with no artificial fill light added? Do they look unnaturally high in contrast? Maybe in the early days of color (3-strip Technicolor, Kodachrome slide film, etc.) but you can shoot a movie in available light with no additional fill and get results that look natural without seeming overly high in contrast.

I would imagine there are cinematographers who will shoot for more information in their 'negative' before compressing it in post. I certainly light for the on set image to be as close to what I am after as possible. Of course, there will be times when I have less control on set that I might like and I will have in mind an adjustment I can make at the DI stage. The DI is a powerful tool and it would make no sense not to take advantage of it.

dmullenasc replied to LF on 1917 5 mins ago Think of it this way, if nothing moves, the distan...

dmullenasc replied to LF on 1917 16 hours ago However, I'd counterbalance that again by say...
Top Forum Posters