The most cost effective way is really to use ‘live’ ammunition if the camera is facing the gun, the armorer will load the gun with a half charge cartridge to reduce the noise but a full charge blank if needed. Faking a firing gun doesn’t always look right, you don’t have the recoil or the smoke from black powder. There are various ways to disguise a firing gun by clever camera angles but the initial muzzle flash is hard to fake. You can create flashes using various lights on actors faces etc but it’s quicker to use a real gun or imitation one that fires blanks. There are thousands on the market to choose from ranging from $50.00 to $1,000 depends on the degree of model accuracy. Ear defenders are a must to satisfy Health Safety types. 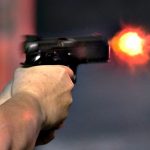 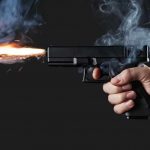 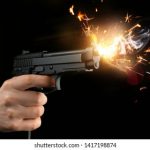 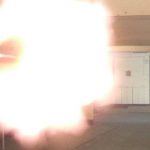 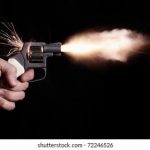 You might want to consider just using a sound effect or stock footage of a gun firing in close up. Otherwise, do - and I am very serious - let the police know what you are doing. Which may raise all sorts of problems about shooting permits, depending on where you are shooting, but is much better than what can happen otherwise...

Very easy - you get a conjurer's flash-gun and load it with flash paper and place it on the pistol or rifle barrel right at the muzzle and on the side away from the camera.  This gives you a realistic muzzle flash.  You can get single and double-barreled flash-guns on eBay - search "Flash Gun Magic Fire trick".  They cost about $10 and work best loaded with flash paper.

Dub-in the bang afterwards, remembering that sound travels at roughly one foot per millisecond, so suitably delayed by the time it takes for the sound to reach the place where the audience imaging they are placed.  At 24fps, each frame is roughly 40ms = 40 feet = c.a. 12m, so for most stuff, it needs a half-frame or 20ms delay to be realistic.

You will have to edit a tiny bit of the video out after the flash as it takes a few frames to happen and you need just one frame of flash.  If it is a large gun, e.g. a shotgun, someone should jerk the gun a bit on a fishing line and from behind the actor to mimic the recoil.

The results are more realistic than using a real gun loaded with blanks as these are low-power for obvious safety reasons (yet can still blind someone if they are within a few meters!)

For an even better result, the barrel of the flash-gun can be placed inside the muzzle and triggered by a switch at the trigger of the gun with a wire leading out to a 9V battery.

The Byre
2 months ago

Thanks! Silly story - I was talking to a movie-prop maker about a month ago, asking him if they'll still be there when we need special replicas made (because of the lockdown and the fact that most movies are in stasis) and he told me that they have survived very well because the British Army has been ordering wooden guns.
I seem to remember being issued with a real gun when I was in the military! The imagination boggles!