First of all, congratulations on The Goldfinch!

Watching the scene with Theo and Hobie at Hobie's apartment I wondered how did you get all that light back to Hobie's face. There doesn't seem to be any light or bounce out of shot, yet it feels like! To me it looks as if there was a bounce which was removed in post, but surely that is not the trick. Probably I'm speculating too much and it's just the light coming through the windows that bounces in the mirror and the furniture, but...

Could you tell us how did you do that? 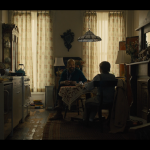 Outside the windows there are large Ultrabounce reflectors with HMIs bouncing into them. Then there is a light diffusion and correction gel on frames tight to the glass. This light is naturally quite soft and spreads around the room but there is also a special for Hobie. For this wide shot, this was a small LED hidden behind Theo. For the closer shots I could soften this and raise it a little higher.

Hey Roger,
What kind of small LED did you choose to use for Hobie? Also, was there a particular reason why you used that source vs maybe one of the practicals on set? Thanks very much!

I wanted to focus the light on Hobie and not wash out the rest of the shot so I used a small LED panel light and surrounded it with blackwrap.

Focus the light on hobie only for purely aesthetic choice?

Roger, is the blackwrap you use black aluminum foil, or is it something else like a fabric or something? Thanks so much.

It is a foil, yes, made specifically for the film industry.

Maybe this is the blackwrap that Roger is talking about?

Yes, I think that's the stuff, thanks. I can see using it in several different ways.

That is it. It is expensive as its a film making product. You can just as easily use aluminium/aluminum cooking foil if the reflections off it are not a problem, which they really seldom are.

Black wrap is expensive but does last a life time. It is a heavy gauge aluminium (aluminium) foil, made like cooking foil ie, continuously  rolled from a solid bar of aluminium. The “black wrap” foil is then coated in a primer base paint and sprayed matt black. This is a very durable paint that lasts and lasts. You can shape it in any way you like and it maintains its shape until you use it again.

Photo is of a piece of “ black wrap” used on “Elephant Man”. It has been used many times hence the crinkles but still does the job. 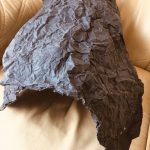 rlandry1 replied to Robert richardson: 4 hours ago As a cinematographer, I "doubt" (pun intended) Rog...

Roger Deakins replied to Doubt 5 hours ago We would shoot 12 or 14 hour days. We shot the fil...

Roger Deakins replied to 1917- Panning shots inducing slight dizziness ? 5 hours ago The Trinity is a little different to a Ronin as it...

Roger Deakins replied to 360° on George in 1917 6 hours ago There is already a thread concerning this topic. Y...

Roger Deakins replied to What does "cinematic" mean to you? 6 hours ago I guess it is a feeling! Its certainly not specifi...

Roger Deakins replied to Doubt 6 hours ago None of 'Doubt' was storyboarded in adva...

Roger Deakins replied to Robert richardson: 6 hours ago I don't do anything in particular. I certainl...
Do NOT follow this link or you will be banned from the site! Scroll Up