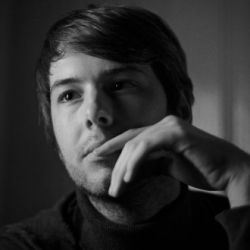 Firstly, I just want to say I really enjoyed Blade Runner 2049. I loved almost everything about it - most notably the lighting.

But I was wondering what went into creating this effect of light reflecting off moving water? Was it relatively straight forward or did it require any specific gear or techniques?

I am thinking about using this effect for an upcoming project, so any help would be appreciated. 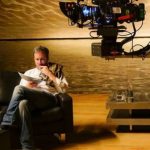 The water was lit with 10K Fresnel lamps. There were two per side making eight in all. It was a very tricky rig because it had to be quite high, so as to not be in shot, and the lamps had to have the right angle to reflect and spill across the wall as they do. I was originally expecting that I could do this effect without lighting the water so much. The bottom of the pool had been painted black so, in my naiveté, I thought it would stay quite dark.  Consequently I asked my gaffer, Billy O'Leary, to constructed long barn door extenders so that the pattern of light on the water would be a pleasing symetrical shape and the light from the two lamps would merge together.

Of course, the revolving light ,which is all that is lighting the actors on the platform, was another rig entirely. The caustics were just the background.

With the lights circling the set like this a lot of the time the actors are in silhouette.
I'm curious was there a discussion at any point about timing the lighting to the actors performance or was it just played by ear? 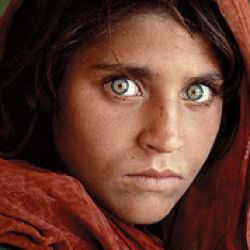 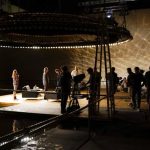 I have got one of those broll images 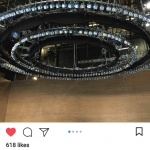 Nice picture. the outer ring was the main source and the inner ring just played late in the scene to soften it up. About 15 lamps per ring were lit at any one time.

Woah... What a rig! Thank you for the incredible work on this visual masterpiece. Quite a challenge living up to the original and so grateful that this did just that.

So was the overhead rig connected to a computer and programed to light up certain lamps in succession?

Was this at all similar to the rig you built for the temple scenes in 'A Serious Man'? They look quite similar.

Similar in concept but the one I used for 'A Serious Man' utilized household bulbs to get a broad soft light effect, whereas here I used 300watt Fresnel lamps to focus the light in a specific area. The light still appeared soft because of the width of the number of lights burning at any one time. To begin the scene we had, maybe, 12 lamps on at any one time but the center of these twelve lamps would be the only ones at  anything like full intensity. the outer lamps of the twelve would have been almost off. This effect 'chased' around the circle and the number of lamps burning at any one time grew as the scene progressed.

Out of interest, how would you approach this differently given the trouble you had flagging the lights? 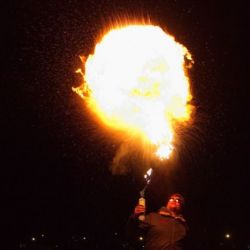 We also had some custom built, computer-controlled wave machines on set...

Glin replied to Denis Villeneuve movie 2 hours ago The DP on this movie André Turpin is admired by e...

JH replied to Technocrane Usage in Studio 2 hours ago Thanks Roger - good to know!  Any chance you&#039...

Roger Deakins replied to Technocrane Usage in Studio 2 hours ago Be careful, the Trinity is not a rig that is commo...

JH replied to Technocrane Usage in Studio 6 hours ago Many thanks for those thoughts Roger - that's...

Roger Deakins replied to Denis Villeneuve movie 7 hours ago 'Incendies'. It is brilliant.

Roger Deakins replied to SDR and HDR versions of 1917 7 hours ago My! We did so many versions I have to say we did s...

Roger Deakins replied to Technocrane Usage in Studio 7 hours ago I would be careful about being locked into one pie...