Any specific models of Flashlights? (2 replies)

Hello, I don't have a huge budget on a project to test out lots of flashlights.

Are there any models you'd recommend that look good.

I've heard Roger, you like Surefire flashlights that aren't LED, but I can't seem to find any, even on Ebay?

Are there any Lumen numbers I should try to hit in a non LED light?

Can you modify the plastic lens at the front of an LED flashlight, by coloring it more amber, to make it look less daylight-y

May I come in here,

I have been collecting flashlights for a long time and has become an obsession, anything that emits light just fascinates me, always has done. I must have atleast 200 varieties from around the world, seem to collect them wherever I go, I know, very sad.

I have many dating from the 1900’s, some plated with Chrome or Nickle, some Mother of Pearl but they nearly all share the same switch mechanism which is the weakest part of a flashlight.

Modern flashlights introduced the compression switch which is more reliable that the old tin sliding version that corrode quickly. Also the current has dropped from around 12 volts to 1.5 volts due to LEDs needing less power. The lumens produced by these tiny flashlights is phenomenal, unbelievably bright from such a tiny bulb.

Examples of these new types can be found in Police forces around the world, they use a round canister that hold 3 AAA batteries but do have a short life if used frequently. The flashlight I would like to mention are the ones in the attached photo. These are pocket sized flashlights that only take 1 AA battery, they also have a ‘glass’ domed magnifying lens which can be extended to focus the beam. Not only that they have a clip to fasten to your lapel and are machined from a solid bar of aluminium. Extremely robust. But there is something else, they are incredibly cheap. I buy bulk from the Philippines and they work out at $2.50 each. Cheap as chips, worth every penny imo. The big advantage is that they only use one AA battery that means less contacts to go wrong, that means reliability.

You can bunch them together with elastic bands or disperse them to give multi angles. Add gels to taste or diffusion and you have a complete lighting system, ideal for prepping a scene using models or use real time as a cheap lighting package. 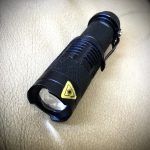 In my opinion, buy a few different options on amazon or ebay and test them. What works for some may not work for others. And brightness is relative to your scene. If you're working with very low light levels, some of the LED lights Mike was mentioning might be too bright anyway. And yes you can always cut a small piece of gel and glue it to the front of the flashlight to manipulate brightness and color. Watch out for flicker with the LEDs though!

Mike replied to Eyelights in No Time To Die 2 hours ago “No time to die” JB lighting effects.

Mike replied to Eyelights in No Time To Die 2 hours ago I have not seen the film but there are many ways t...