Why do some Cinematographers & Directors still hold onto Celluloid Film?? (4 replies and 3 comments) 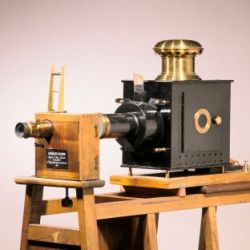 I just watched this YouTube clip showing the very different views of digital cinema vs. celluloid film between Mr. Deakins and Quentin Tarantino:

Granted many years ago the argument could have been made that digital cinema wasn't nearly as capable of capturing beautiful images as well as film.  But now it is quite clear that those technological and aesthetic hurdles have been overcome and digital cinema is here to stay.  Especially after the technological/imaging advancements that ARRI and other camera manufacturers have made over the years.  And as Mr. Deakins rightly points out in this video, a camera is just a tool (like a hammer).  The most important thing is who is using that hammer, as some know how to effectively use it to build things better than others.  But, why wouldn't you use a more efficient hammer to get the same (or arguably better) results than an older less efficient hammer?  I remember the days, not too long ago, when independent digital filmmakers were trying to emulate film by adding digital plug-ins to create gate weave.  Now I cringe when I see gate weave on an older shot 35mm film.  Is gate weave better?  Is waiting for dailies better?  Or is using the most efficient and best tools available for capturing beautiful images what truly matters?  I have to say that Mr. Tarantino's comments sound very much like the comments made by people when film technology transitioned from silent to talkies, and from black and white to color.  Technology always advances and better tools are subsequently developed.  So, why do some cinematographers and/or directors still continue to hold onto celluloid film?  You really can't argue anymore that celluloid film produces superior images to digital.  Is it nostalgia?

In the soundbites curated for the video Tarantino doesn't seem to offer any substantive argument apart from the comment about film being "a series of still images" and implying that this is somehow different from the way digital cinematography and digital projection work, which obviously is mistaken.

I think Steve Yedlin had the right way of looking at this by asking people to consider formats in terms of the information they can capture and what creative choices you can make with that information. In which case, in 2021, preferring film mainly comes down to its superior highlight latitude and highlight rolloff? Apart from that, if all you have to fall back on is the 'good tummy feeling' shooting on film gives you, it's not an interesting conversation.

It really depends on the artist and how they feel what conveys what they want to create.  Quentin Tarantino loves film, in fact he is a very large original film print collector. To him movies are "films."     I had a professor who only shot her work on a large 8x10 large format camera, it was the only way for her to create what she wanted to create.   At the end of the day, the creative person can create with whatever tool they have at hand.  I had a  classmate  back in college who said I only got the sports shots I did because of my gear.  We went to a basketball game and I gave him all my gear and took his camera and we compared our shots.  He honestly was amazed I made the photos I did with his camera.

Both Frank and TWSILK make very valid points.  Creative vision plays a crucial part in selecting the right tool.  And as Frank rightly points out film has superior highlight latitude and highlight rolloff (at least as of 2021).  And I understand that Tarantino is a huge celluloid film fan.  But, I would argue that just being a "fan" shouldn't be the deciding factor on what tool you ultimately use (and in the process discredit other cinematographers/directors for making that creative choice).  What baffles me is how Tarantino questions in the video, "Why an established filmmaker would shoot on digital I have no f*cking idea."  Just looking at the 2021 Oscar nominated films puts a gaping hole in that argument.  Almost all of them were shot digitally and by very "established" filmmakers/cinematographers.  Even staunch celluloid film proponents Janusz Kaminski & Spielberg have shot films digitally.  Looking beyond the visual aesthetics debate, as Mr. Deakins rightly points out, a digital workflow is way more efficient than a film workflow (both on-set, in post, and ultimately in theaters).  Most theaters today are projecting films digitally, providing audiences the same image quality the 1st screening as the 100th screening.  Can't say that for film. 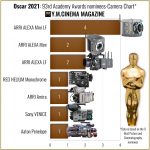 Well the other thing is the context of when Tarantino actually said that. This website had this quote and it is from 2013 "Of course, Quentin Tarantino has been a cheerleader for film stock over digital filmmaking over the years. “As far as I’m concerned, digital projection is the death of cinema,” said Tarantino at the Cannes Film Festival in 2013. “The fact that most films aren’t presented in 35mm means that the world is lost. Digital projection is just television in cinema" - https://www.phactual.com/8-directors-who-still-use-film-stock-instead-of-digital-photography/» and I don't know how old that website is.. I have a digital projector in my house, because to me a movie needs to be seen big and projected on a screen... there is something about the magic of having a blank white canvas facing you like a painter canvas and then the image starts to dance across the screen. At the end of the day I want to see great movies!

I think this certainly is a fascinating discussion to have to understand the thinking behind certain cinematographer's/director's camera choices (film or digital) and lens choices, which arguably is a more important decision in the look of a film. That being said, I don't pretend to be an expert on any of this... far from it! To put things in perspective, in film school I began by shooting on 16mm film. But now I normally shoot on $10,000 Super 35 4K digital cameras with $5,000 Canon cine lenses, not on a $60,000 ARRI Alexa Mini LF with $25,000-$40,000 ARRI Signature Prime lenses. So, a completely different stratosphere in gear (not to mention talent). But, in the end it's a lot about proper lighting anyway. I did work in Hollywood for several years on film/television production, but my overall experience might be more akin to Deakins' early documentary days... if that. But, I continue to learn and grow professionally. And that is what I enjoy so much about this industry: constant learning and growth! So, that being said, I will now gracefully pivot and defer to Mr. Deakins' vast wisdom and deep experience on this...

Mr. Deakins, I would be interested to know (if you have time to actually read this long-winded thread) the following:

1) What were the factors that motivated you to make the transition from film to digital cinema?
2) On the films that you've shot digitally, is there anything that you missed that shooting on film offered?

I do miss the simplicity of shooting on film but I am really thinking way back, before monitors and playback were introduced. Do I miss anything creatively? I would say most definitely not. As I have said on previous occasions, I often can't tell if a 'film' was shot using emulsion or pixels and I have to refer to imdb to find out. I find the whole discussion pretty irrelevant really as the story and the concept behind its visualization are so much more interesting and important than the brush that was used.

Thank you Mr. Deakins for your response! I think many times a lot of us get overly caught-up in camera/lighting equipment, myself included, and overlook the forest for the trees. Yes, shooting on an iPhone will look quite different than an ARRI Alexa Mini LF. But as you rightly point out, the overall goal with all of this is to tell a compelling story. Story is king and the visuals should help tell that story - that's what my professors back in film school would always tell me. I think even some big budget Hollywood films get caught-up in this by focusing too much on GCI effects or "cool" camera moves, that don't necessarily add to the story. However, that seems to sell tickets. But, that's a topic for another day...

I just want to thank you for taking the time to respond to my questions. I'm sure most people here admire your work and exceptional talent, myself included. And for you to be open with your time to actually answer people's questions is very generous on your part. I imagine some of the people I used to work with in Hollywood would never respond to questions posed by the public.

In my career I've found I've learned the most from others I have worked with directly whom have greater experience than me. Since obviously we are unable to work directly with you, the next best thing is your willingness and generosity to answer questions and for us to learn from your vast experience. To be able to do this remotely over the internet is an invaluable opportunity. So again, thank you for your response!