Here's a short film we recently completed. I would love to get any feedback anyone has from camera work to editing to image quality or anything else.

Trying to learn and improve with each project.

Simon first off well done on actually completing this short film. That is no easy task in and of itself. Bravo.

You had some nice camera movements I thought looked good. The little movement when the car enters the gas station was nice starting low, coming up to a nice frame.  And some of the slow push ins.

I think the dialogue felt a bit choppy and didn't flow. As an argument between the two friends normally that would maybe occur quicker with the call and response.

But thanks for sharing. Hope to see more of your work in the future.

Thanks Jacob! I appreciate your encouragement and feedback on the dialogue. Definitely a learning experience. cheers.

Mike
5 days ago
Mike 5 days ago

Tennis court scene had issues. Actor on right of seat had continuity problems. He was Initially out of breath, then not out of breath between scenes, this broke my concentration. I would have positioned the camera at ground level looking up. There was a slow ‘push in’ while an actor was delivering his lines, this annoyed me. Sound track was not clean, heard other people talking while actors were talking. Perhaps SFX of tennis balls being hit may have been better.

Car entering garage forecourt was initially slow as though he was waiting for the ‘cue’ for action. Actors took too long getting out of car, then the driver casually threw his cup in the bin and turned to deliver his final lines but lacked conviction, should have been more energised before the cut to the other actor responding back with an explosive “WHAT”!

This is a really a lovely short imo but needs tweaking.

Well done, a superb effort. Looking forward to seeing  your next one

Only my opinion ofcourse, for what it is worth.

Thanks Mike! I appreciate you writing back with your thoughts. Yes, we had some continuity problems on the tennis court scene. I think I've figured out how to avoid such problems in the future. Nice idea with the SFX tennis balls! I'll remember that. I've realized that as the director I need to focus completely on the performances. With our tiny crew I was the clapper, 1st AC, grip and director. Not ideal. But will address that for the next project. cheers.

Encouraging others to help you in making a short film is really difficult, they just don’t have the same desire to get it finished. But you did Finnish yours and it was a success. Thankyou for letting us see it.

Thanks for the encouragement Mike. Actually I feel very lucky, our small crew is very dedicated and inspired so that part was a breeze. I'll apply everything I(we) learned on this one to our next project later this summer.

Forgot to mention that the images/ lighting was very good. I watched your film 6 times with reference headphones and was watching it with ‘fresh’ eyes, you made the film and are probably sick to death watching it, sometimes it pays to shelve it for a while then take fresh look at it much later. You then see imperfections and reshoot it if possible. btw, I do like your ‘Coffee Break’ titles and can see a market in those short films. These are great continuity shorts. The film you just submitted doesn’t actually make sense but it’s certainly entertaining and I love the concept, these may have a cult following.

cujo
4 days ago
cujo 4 days ago

It's interesting you mention editing, because that's where your main problem was. Virtually every cut broke eye trace:

This is probably why one of the comments said the dialog was choppy. It wasn't the performances or the timing of the edit but the SLAP feeling that repeated breaks of eye trace in a scene create. Learn the basic rules of editing and then shoot for the edit:

Less important but still worth noting: the shots of the bench scene from the blue shirt guy's side have very harsh lighting. You could shot all your longs from the other side and then replaced the harshly lit shots with close-ups shot somewhere with better lighting.

I liked the idea for the shoot!

Also, if you're shooting alone, a selective diffusion like a Tiffen black or white satin might help when you're suffering from the lack of grip and have to work with harsh light. Shooting in open shade is even better though - ie shoot in the shadow of eg a building but choose a shadow with something like a white building facing you - you'll block the harsh direct light and the nearby building will be a nice source of soft light.

Cujo - thanks so much for all your feedback. It's so helpful to get specific techniques pointed out. My aim is to improve, so this is great.

Your mention of eye trace is a good point. To be honest, I was vaguely aware of this editing guideline, but was torn between making the edits seamless and making them feel more disconnected, like the communication between the two characters. Maybe I could have placed the actors a little closer to the center line - still allowing for the disconnect but making it easier on the audience?

You mention harsh lighting on the tennis court scene. I also felt that we may have misjudged the exposure, but I believe what we're seeing is the actor with the red shirt has very pale skin and looks overexposed, while the actor in the blue shirt looks fine. Here's a still from 'A Serious Man' which has something similar. If you have time, tell me what you think.

Again, I very much appreciate the feedback, and the links you provided. I will be watching those videos shortly! 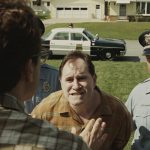 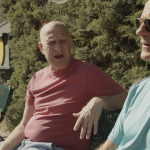 Mike
4 days ago
Mike 4 days ago

The left hand side of the this scene is not needed and is only a distraction for the viewer. The dialogue is very short so all the audience need to see are just the two characters especially their facial expressions. They should fill the frame in order to dominate the scene, you don’t want the audience scanning the frame while the actor delivers his lines as that will confuse the viewer.

Obviously, if there is more dialogue then you can move the characters around from one cut to another. The script always dictates the number of cuts within a scene. 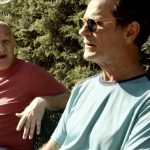