Great news! New Film Production Studios to be built in the UK. (2 replies and 3 comments)

Hollywood’s ‘Sunset’ studios announce they are to build a new studio complex in the UK. The 91 acres site at Broxbourne Hertfordshire will house 25 new sound stages and TV/ Film digital editing facilities. The £700 million investment will also include a new hotel and film school, the location was chosen as it is not far away from Warner’s Leavesdon studio complex where ‘Saving Private Ryan’ and the ‘Band of Brothers’ were filmed. This was the site of the old ‘De Haviland’ aircraft factory where many famous aircraft were built ie, the ‘Mosquito’ and the ‘Comet’ jet airliners were built plus many more. The runway was left intact and used by light aircraft clubs but  is now being redeveloped. The new studio complex will employ 4,500 people and will contribute £300 million to the local economy. Understand, the British government has provided tax and ‘other’ incentives to attract developers in building other studio complexes.
If this goes ahead it will be Europe’s largest film studio, the local authorities have yet to approve planning permission but they say it could be up and running by late 2022, that’s certainly a fast build.

’Sky’ Is also planning to build New sound stages on a 20 acre site 20 miles further on. This will also include new TV/Film digital services.

May I add that a 15 sound stage studio was to be built 4 years ago at Dagenham near the old Ford works East of London, planning. Permission was obtained but the developers pulled out, they did build a sound stage but this was then turned into a Casino with a James Bond themed club was established. You had to wear a black tie to get in but packing a ‘Walther’ was optional! The local council were very disappointed as they also invested monies in the developement. The future of the site is still under discussion.

May I also add that developers built 8 sound stages in Wales many years ago But no production companies were interested In moving that far away from London, it’s now used as a Lorry Park and for food storage and will never be used for film production. What a wast of money imo.

Developers should look back into the 1950’s when MGM built the largest studios in Europe, the last production here was the ‘Shining’ second hotel set front night scene, while filming, the studios destruction had already started hence the night scene. These were modern facilities on the other side of the road to the already established aging Elstree studios which surprisingly are still in business, BBC have a long term lease agreement from Hertfordshire council, many major films have been made here including Star Wars, Superman and the Shining these were just a few. My favourite ofcourse was ‘ ‘Ice cold in Alex’ with John Mills. One of the ambulances used in the film has been totally restored and now resides at Buckfastleigh Devon. (Available for film work).

Uk is now ‘awash’ with film studios, Pinewood is going to double in size and now Shepperton is going to ‘quadruple’ with the announcement of new stages and editing facilities. I have a house there to rent so that’s good news for me. 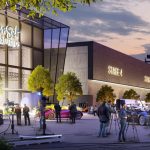 For some reason, plans to build film studios have otherwise sensible business people leave common sense and caution behind.  Here in Scotlandshire, we have had one nutty plan for new film and TV studio complexes after another - and they all amounted to nothing after gullible politicians were already wetting themselves at the thought.

Very often, these plans are a way to shake some subsidies out of the local council and/or politicians and then do a bait-and-switch and put up some nominal studio buildings and use the rest of the land for bog-standard property development.  When nobody uses the studio, it is converted to something people will use - like a casino!

The company behind Sunset is Hudson Pacific - a property company.

We own a 20-acre site and we have already one film 'green-lit' - it was two but the C19 thing killed the first one.  All we need is for governments to allow international travel.  We shall just get on with it and without announcements and without subsidies.  The 'Just do it!' principle.

If I were you, I would phone ‘Sunset’ and dump that 20 acres onto them.
Let them build the housing estate, the casino, shopping Center, or maybe studio complex. While they are up to their necks in mud and bricks you could be living the life of Riley or (Macwimpy) laying on a hammock on a golden Sandy beach while ladies in grass skirts massage your temples. I know what I would do!

The Byre
3 months ago

I'll pass on that! But thanks for the offer.

Ah, the life of Riley. "Are you the O'Riley of whom we hear tell? Gorblimey O'Riley, you are looking well!"

I am already living the life of Riley - at least, that's what my friends tell me!

Friends just love to give advice, they also like to borrow money!

thrang replied to Dune , mindblowing 10 hours ago While I enjoyed it, it was not without issue for m...

CountGiger replied to Looking for Chinese speakers 11 hours ago Hi James!
I'm an undergraduate student in the...

Nareg.A started Do you watch films when youre in the middle of mak... 21 hours ago Hey Roger,
This is a weird question to ask but, ...