I'll post question up here so you dont have to scroll through my rant: How was the camera operated during the scene where Schofield is in truck with other soldiers? The camera was able to move around the characters in a seemingly tight space. Was this somehow done on a set?

Got a chance to see this film a second time. I noticed within 15 minutes of the opening shot the film sweeps me away and I forget  to analyze! it's not until a point in the story when the continuous movement stops that I remember it's all in one shot. It truly is an immersive experience, I'm not trying to be hyperbolic but I cant think of anything bad to say about it!

I noticed some greek mythology  as well which I've noticed more and more in stories nowadays... The church on fire made me think of the underworld, and when he crosses the river and the dead floating bodies made me think of the river styx as he makes it back to the land of the living! It's really well done writing.

The camera was under slung on a Stabileye remote head. This was hand held and I was operating the head remotely.

Captured a screenshot from a short clip from bts footage of what you're talking about.

I'm assuming this truck was made specifically for this scene so that the cast could move about enough while there is still room for the camera and operator behind them.

Was the truck moving at all during this scene or was it static with green/blue screen? 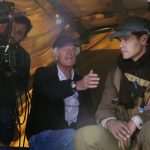 Roger,
The soldier in this photo is wearing ‘chain mail’. This means he was one of the tank crew. Did you film interior scenes of a tank but was omitted from the final cut.

There was no process work and the truck was moving through a location on Salisbury Plain. The truck was made as a replica of one used in WW1 and we had a side flap that could open to accommodate the camera.

Some foot soldiers did use that kind of chain mail protection. We shot nothing that was not in the film. Every part of the film had to work otherwise it would not have 'cut' together as a single shot. It was not as if we shot a bunch of coverage and it was edited as a single shot, though that is what a number of comments about the film have suggested.

Wouter replied to Art Adams (Arri) on Signature Primes 4 hours ago Nice video!  Yeah well, ADR is often not amongst ...

ThomasMiceli started Exposure Index 11 hours ago Hi Roger, Today in lecture I looked at exposure in...