NOTE: The following questions grew out of an exchange in Podcast Episode 35 with Editor Joe Walker.  But as my questions have almost nothing to do with editing, and everything to do with shooting, framing, and composition, I thought it best to post in this thread.

"It's extraordinary how much you can get away with though can't you in terms of continuity from shot to shot.  In the past I've worked with script supervisors that have been obsessive about where a coffee cup's been on the table, or the relationships between two people if I've changed their distance by a foot because I want them in a different kind of frame.  And it feels right on set.  You kind of feel it's going to cut."

"If you were doing a conventional shoot, when you go in close you would move things around.  The table doesn't have to be bolted to the floor.  You just pitch things around to make a great framing.  And I've often been told, no.  That's scientifically incorrect."

You all spoke about this very casually, which gave me the impression that repositioning actors and props to improve framing when moving from wide to closer shots is done all the time.

Yet this struck me like a bolt of lightning as I'd never heard of anyone doing this.

I then asked all of my filmmaker friends, and no one had ever heard of this.  What's more, everyone said they would never do this out of fear of creating a continuity error.  One of my friends had this great line, "I always feel like a slave to the wide."  At least when it comes to the positioning of actors and props in the frame.

To say that you've really got me thinking about this would be a massive understatement.  I'm wondering if I should consciously incorporate repositioning actors or props when moving from wide to closer shots as a fundamental part of my filmmaking process.  Thus the following questions:

1. When do you most often reposition actors or props when moving from wide to closer shots?  In what type of scenes?  In dialogue scenes with actors who are more or less stationary for that part of the scene?

2. Do you do this frequently?  Would you say this is something you do routinely as a matter of course?

3. What's the greatest distance you've ever repositioned actors or props when moving from wide to closer shots?  A foot?  A few feet?  Or are the distances generally much shorter?

4. Do you do this simply to enhance the composition?  Or do you sometimes do it to subtly convey a change in the relationship between the characters?  Not unlike changing lenses to make the characters feel farther apart when moving from wide to closer shots—even though the characters haven't moved within the space.

5. Have you ever done this, and then, when reviewing the footage, felt any concerns for the resulting continuity?

As I struggle to wrap my mind around this, it occurs to me that I could avoid any potential continuity concerns when moving from wide to closer shots if I don't go back to the wide shot.  But of course you never know how the shots are going to be edited.  So that's hardly a safety net.

Thank you for opening my eyes to this technique.  I feel I've stumbled onto something extremely valuable that will enhance everything I do going forward.

Sure, props and furniture are cheated all the time to make a better composition -- how much depends on what you think you can get away with.

This is a more radical version -- I shot a scene near the Washington Square Arch and near the end, we wanted a low-angle shot with the arch framed behind our actress. I ended up having to move her nearly 30 feet(!) away from her mark under the arch and put her on a 4' platform just to get the top of the arch into frame, that structure is taller than you think! 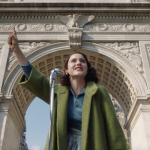 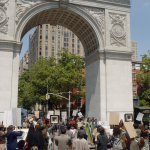 Here's another big cheat that I got the idea from "The Color Purple" -- I noticed a telephoto shot of Celie on her porch in her rocking chair with a big sun ball behind her and realized that the camera would have had to be fifty feet or so from her on a long lens, basically inside the house somehow, so they must have built a section of the porch in a field so they could line it up with the sunset and back up and use a long lens. For "The Astronaut Farmer" I asked the art department to build part of the porch on a hilltop so I could get the setting sun in the background (the real house was surrounded by hills.)  So that's what we did. 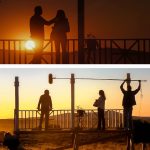 There was coverage on the real porch as well looking back at the actors.

Peter Falk: "We were shooting a scene in Columbo and I come on set and look around - there no camera. I said 'Where's the camera?' and the director told me that the camera guy is shooting from a building across the street. Some youngster called Spielberg."

Here's an example of some coverage in a scene. When you set something like this up, the camera is right next to the off-camera person for a tight eyeline. But then you can adjust everything for the composition -- if the window on the right isn't in frame enough, you can rotate the table, actor, and camera until it comes into view or you can slide everything a little closer to the window. You move candles around all the time in dinner scenes (more often with the tall ones so that they don't line up with faces) plus wine glasses, etc. You sometimes move out of shot objects that you don't want repeated in the reverse angle with the same table in the foreground, like the wine glass that the off-camera person has to pick up. In this case, the camera is "inside" the space of the off-camera person and half the table at the bottom of frame, so you have to arrange objects so that things don't jump around when you cut back and forth, like the candle. 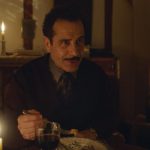 I posted this one before when talking about tilt-focus lenses but to get the billboard into the shot, I actually had to lift the front end of the car by nearly 3' onto blocks, so the car was very unlevel. The actors must have felt they were in a spaceship capsule... 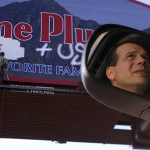 Thanks for all these examples !

For what it's worth: I'm a film crewman.

I feel like cheating is either done correctly or terribly. In Jumanji:The Next Level, for instance it wasn't done too well, (maybe it was because I worked on the movie and I know the secrets) but we cheated entire locations! One angle of the scene we would shoot on a set in Atlanta in a backlot, then we would shoot the reverse in Calgary on an actual mountain! Or we shot scenes on a sound stage, then shot the reverse on an exterior at an abandoned rock quarry. When I watched the movie, I was appalled at how (for me) it was bad continuity. There was a fight scene at a horse stable that is absolutely abysmal and so out of whack - because first unit and second unit would shoot the same scene, different angles and shots, at two varying times and it could never be cut together coherently.

But other times, people cheat very well and you never know, as per evidence by the above photos from Mr Mullen. So, I would conjecture that to properly cheat, the Director/DP/or Editor should be able to have a defined vision for how the scene is going to play or how it can be cut and edited, to minimize any continuity error, and for the scene to "feel smooth" with regards to the cheat.

Also having a very good Scripty, and excellent Prop Dept. and On Set Dressers will help to adjust the props/set dressing to match up with continuity. Taking stills and matching props/objects to previously shot frames helps matching continuity, even with a cheat, if you adjust the prop accordingly, or the table/furniture distance in relation to the frame, you can fool just about everyone.

Not sure if this helped answer any questions, but I say if you aren't cheating, are you even trying??

I don't believe either David or I am suggesting you change an actor's position or move a prop for the sake of doing so but it can be part of the process. Just as I will adjust the lighting from shot to shot, or change a lens, I may adjust the set in some way, by either moving or removing an object that I feel distracts or adjusting an actor's position relative to the camera and create a 'better' composition. David's examples show how much can be done without appearing to be a glaring error in continuity but I'm sure we both do many more subtle adjustments all the time.

In terms of what you can get away with? Take a look at Scorsese's 'Alice Doesn't Live Here any More', which is, for me, one of his very best films. There is a scene that takes place in a car and cuts between the two main characters in crossing profile shots. It was not until I had seen the film a number of times that I noticed the sun was shining brightly on one angle but had already set on the reverse. Of course, this is not ideal but, sometimes continuity has to be sacrificed for just getting the scene shot. And, no, that is not an argument for being sloppy.

If you move an actor an inch or a coffee mug an inch or the chair the actor is sitting in a few inches and the viewer is unaware of the change, then it's a difference that makes no difference... other than making the shot better.

Vanniyan replied to American Beauty dance scene 4 seconds ago It was shot by Connie. Not roger. Seems like you a...

Ricki-Minaj replied to The color temperature change? 32 mins ago Hi! I think you should have no problems. You will ...

Jacob W. replied to Any advice for getting better handheld shots in th... 3 hours ago Maybe try constructing a DIY steadicam? Thats what...

fukuichi started The color temperature change? 3 hours ago Hello Roger and everyone! I have a question. I sho...

Vanniyan started The Mauritanian shot by Alwin H.kuchler 10 hours ago Dear master roger have you seen the movie trailer ...

Shyam Ediriweera started Utilising 2nd Units 13 hours ago Hi Roger, I wanted to ask you and the Forum member...