Communicating diminished sense of self, while close/tight enough to capture gesture (4 replies and 1 comment) 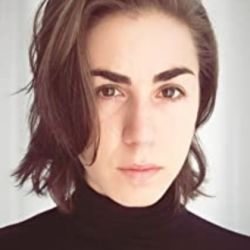 I've written a film in which the main character (a young woman) has a diminished sense of self, but is also a character of gesture.

I would love for the cinematography to evolve over the course of the film, beginning with her feeling diminutive and ending with her firmly at the center of her own world, having stepped into --and taken command of-- her intellectual power.

I have a few ideas for 'diminished sense of self' that worry me because I want the viewer to be close enough to feel her subtle physical reactions. She is, after all, our protagonist!

Simple ideas like: longer-tighter shots for people she perceives as important vs. wider shots for her make me worry that we'll feel disconnected from her. As much as she might see the powerful men and institutions in her life in close-up, we also need to feel her reactions.

Of course, other elements of the film will serve the beats of this evolution, so by no means is the entire burden on the camera, but I'm curious if you have any thoughts about how to approach this visually?

Oh, I forgot to add -- if there are any films you think have achieved this, please let me know. I'd love to see how others have addressed this particular puzzle.

Niki,
Have a look at ‘Double Jeopardy’ there are elements in this film which you could apply to your script. One of my favourite films and contains some very powerful performances (Ashley Judd) from a woman’s point of view. Certainly worth a look.

It seems to me you could use framing to get some of your ideas across. You might want to take a look at 'Ida'.

I'd look at the framing in Jane Campion's movies.

Thank you for the recommendations everyone!

CarmenHodges replied to Lighting a moving car interior 41 mins ago SEO refers to the procedure of enhancing websites ...

Roger Deakins replied to Colour in movies. 7 hours ago There are conscious color choices made and there a...

aneesh.kumar replied to Query about video quality. 13 hours ago Quality looks fine.  Maybe you could have shot th...

dmullenasc replied to Query about video quality. 17 hours ago It looks fine, sells the product, is fun, etc.
The...

vijayank started Query about video quality. 24 hours ago I am an aspiring cinematographer from India. I am ...