The silence of the sea (7 replies and 4 comments)

Dear master roger i watched 'The silence of the sea'. I am just wondering why Melville shot on high angle the French men and his niece combinations rather than eye level. 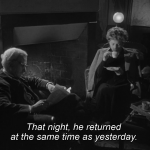 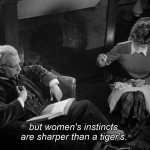 I forgot to ask one more thing. You always said there are lot more ways to achieve unease. But in this case why film makers chose this kind of hard low angle to get unease feeling. 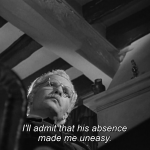 For me, those higher angles imply a point of view, as though the family are under scrutiny. The low angle is quite disturbing and odd. I expect that is exactly the reaction that Melville wanted out of the shot. What effect did it have on you?

Whose point of view? The nazi commander point of view.? For me the low angle of french men seemed very hard. My eyes struggle to see his face and i am sure the frame disturbed me. But sometimes i couldn't express my feeling in correct words. Because of language issue. But your words express perfectly. It's odd. There are different low angle in this movie. For instance low angle of nazi Commender said 'i have a great respect who love their country'. 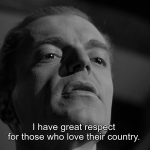 When I say the shot is as if a point of view, I am not suggesting it is the point of view of any specific person. The shot is observational, as if the subject is being observed.

I would be careful of at times over analyzing a shot. I too often cannot put into words why a shot has an emotional effect on me. That is probably why I love images as, like music, they can't always be substituted by words.

Although 'The Silence of the Sea' is almost entirely set in one room and relies on minimal presentation it is profoundly moving. Why is that so? Why does a small film with only three characters and a first film by its director have such a powerful emotional impact? There is a lesson here.

You often cannot put into words why a shot has on emotional effect on you. But I am sure automatically your mind understood everything. Once you said that there would be a reason if Melville moved the camera. So when I learn from the Masters movie the question arises as to why. I do not analyse all movies. Your basics are very strong. So you don't need to analyse for all shots. I assume when you watch any movie your experience tell you everything why those image shot that way. My opinion is that the Instinct Mind comes from a vast experience. And i also would like to ask How do you make shot construction, lensing to suit the taste of Modern Audience? Your inspiration and quote is all older master movies. But you are doing all movies for modern audiences. People's don't like older film making way. At which point you decide these kind of images modern audience accepts. I want to ask you one general questions. Do you believe that art is in the blood when we born!

I disagree with your statement “People don’t like older film making way”.
Today’s audience are not given a choice, they are forced to accept what they are given. Today’s TV is swamped with old movies 24/7, copyright has expired and are bought cheap is one reason, the other reason is that you have to buy TV space at wholesale prices so you need lots of programmes to fill your allocation otherwise you will lose your transmission slot. The other reason is that today’s audience is aretired of modern fast edited type films, they yearn for the days when films had a quality feel, quality titles, quality script and quality acting. You know the names of those films because you watch them all the time, you watch them because they appeal to you, they fullfill your thirst for knowledge, you can learn so much from them. Filming today is no different from filming then, human nature is the same, the only difference is that film equipment has become smaller but it is certainly not better. Humping a blimped 450 lb Techicolor camera was no joke so resetting was not as fast as today’s lightweight cameras so scenes were designed to contain more elements.

The skills then were equal to today’s probably more so, nothing has changed. The problem we have today is that script writers have no wisdom, they have none of life’s experiences, they have done nothing In theirs lives to write about, they have had it easy.

How can you write about pain if you have never experienced it!

I think you put that very well, Mike. As to whether you are born with 'art' in the blood? I don't particularly like the word when applied to what I do. Besides, I came into cinematography as much by chance as by intent. Perhaps you could say that of Melville but I couldn't say.

I agree what mike said about some modern film makers came with none of have life experience. It's happen in my country also. But master roger once we were talk about Sidney lumet 'The hill' movie. He use d wide lenses in that movie. I asked you the same wide lens choice would fit for modern audience. Even the story is same."You said I understand the dramatic purpose but it does seem a little artificial now. That is why I said that I didn't think a modern audience would accept the way some films were made in the past" even i asked you Shawshank redemption lens choice. Because both movie almost similar plot. Do you remember that? It was one year ago.

Many recent dramatic films, 'The Revenant' being a good example, are shot using extremely wide lenses, as are most of the action/fantasy films that are so popular today. However, it is the melodramatic way that the wide lens is used in 'The Hill' that sits uncomfortably today within what was once thought of as a gritty piece of realism. 'Shawshank' does not use such wide lenses and the camera movement is in no way as dramatic.

Master roger could you point out popular couple of action fantasy films today.

Vanniyan! Where have you been? The cinema is virtually dedicated to action adventure and sci-fi fantasy.

Gregg replied to Architectural Photography 7 hours ago I assume you know all the technical aspects of arc...

Steffen started Architectural Photography 8 hours ago Hey, could anyone give me some general advise for ...

G.C. replied to Rota Pola 14 hours ago A polarizing filter can be used to reduce specular...

G.C. replied to Describing a lighting style 14 hours ago Replying to this three weeks later... I wouldn&#03...

Roger Deakins replied to Different Focal lengths for actors 19 hours ago That is something I do from time to time and I thi...

Roger Deakins replied to Gels vs. Nets - Pros & Cons 19 hours ago Hard gels are easier to swap out but you do someti...

sydneydan started Different Focal lengths for actors 19 hours ago Hi Roger, first of all thanks for sharing your kno...

The Byre replied to focus breathing 1 day ago Not Roger (obviously!) but here's my 30 cents...