Dear master roger and david Zeiss introduced supreme prime radiance. But the reason is very funny. I have  read they had pit some uncoated surface on front and rear element to get more flare. Do you both believe it's very important aspect to tell a story. First of all roger and david both you believe context convey through a flare. Do you give any example flare used for convey the context?

I rarely like flares in a shot as I find it almost always distracts and leads attention to the 'process'.

Hi Roger. I have completed the Screenplay of a necessarily very low budget feature that I am desperate to make on which I will be Director and Cinematographer. I have many years experience as a Stills Photographer so would like to shoot this in black and white. It will need to be shot in video, for budget reasons. If it's not too big a question to post on the Forum, could you please recommend a camera and a filtration that might work to give me a clean, graphic image? I had been wondering about the Canon C70 because, as a One Man Band it may best fit my past experience of hand held shooting. Thanks, Roger.

And, yes, Roger: I am could not be more in agreement with you to never show any evidence of 'process'.

If you want a clean image, then you don't really need to use filters.

I mentioned this example before, but the arrival to the Playboy Bunny Show sequence in "Apocalypse Now" is a good example of "motivated" flares to make a story point, which is the surreal nature of the moment (in fact, Fishburn's dialogue explicitly says this). Storaro's idea for the visual structure of the movie was that the conflict of cultures was represented by the conflict of natural and artificial energies, or light -- that the U.S. Army was an intrusion on the natural landscape and would be represented by artificial light -- searchlights, etc. The anamorphic flares deliberately make these sources more prominent, even oppressive. This scene is the best example of this conceit. 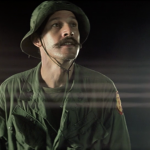 Another example of motivated flares is in "J.F.K." where lens flares causing the frame to burn out to white are used to transition to memories, particularly in the sequence where Garrison reads the Warren Commission Report at night in his study.  Some of the flares are used to enhance the chaos in Daley Plaza right after the assassination.

Thanks David. Flare is also another tool. We have to use very carefully depends the context. Right? In my opinion any flare won't give natural feel. I mean a arrogant character introduction and some people's doing flare while villain introduction. What's your thoughts david

Is naturalism always the goal?

Trumpets often call attention to themselves in the middle of a symphony but sometimes that’s the point of a trumpet... you just have to show some restraint and exercise discretion.

Yes it’s too easy to fall into cliche and overuse “cheap” cinematic tricks, hence why you have to use your judgement and taste.

sydneydan replied to Camera height in dialogues 4 hours ago If there is one actor sitting and the other one st...

Mike replied to How's my Light? First Video. 4 hours ago Considering you had no budget or very little budge...

Jacob W. replied to New to Cinematography 7 hours ago Dive deep into this forum and you will get any and...