Hi. I was watching an interview Roger did on 1917 and I saw him using a camera to film (and I guess transmit the footage to his cameraman so he knew what he was looking for when shooting the trench scene).

I noticed there was some kind of counterweight mounted to a rod at the bottom of the camera.

Is it easier and less shakey to film run & gun like this.

…you holding the rod under the camera and it being centered by a bottom weight? 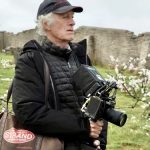 I think you will find it’s just a Sony A7 pistol grip and possibly handheld radio Or battery box.

It was discussed 2 years ago, have a look in the archives as Roger did explain what he was doing.

Thanks i'll do that.

I've been trying to get better at filming handheld footage without it being unusable and so saw this and thought it might be an option.

my brother and a few of his army buddies are thinking of filming something like the chase scene at the end of 1917 so I've been prepping it to make it look good.

There are lots of stabilisers on the market, some cheap as chips but do work and some well engineered and moderately priced, it’s all down to your budget.
All depends on your camera system. You don’t have to spend a fortune, you can suspend a camera on two pieces of string if you had to and the camera will be stable. Too many people are rushing out spending lots of money on expensive equipment and then realising they didn’t need it. A bit of ingenuity is all they needed.
Trying to replicate a scene from “1917” may be fun to do but what is the point?
Start making your own stabiliser and experiment with that and keep upgrading until you get it right. The R & D involved doing that will make you wise! Then you will be in demand.