Placing the camera in between actors (4 replies and 1 comment)

Hey Roger, I hope this finds you well. I love how you shoot a lot of your dialogue scenes where you place the camera in between the actors instead of say an over the shoulder (like in the NCFOM coin flip scene). When doing this is this something you would communicate with actors beforehand?

I ask this because on a shoot recently I had an actor that really hated the camera blocking him from the other actor which I understand, I just find that its a common thing to have the camera in between actors so I wanted to get your advice on handling these situations. Obviously all actors and shoots are different but any advice would be greatly appreciated as he was a pretty experienced film actor.

Also on this note I recently saw this photo that was BTS pic from "Joker" and thought if Joaquin phoenix is ok with it then most actors would be as well. 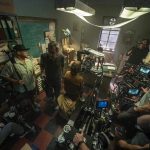 I have experienced problems in that regard, especially when we are trying to keep a tight eye-line. It mostly happens when an actor is struggling with something, whether that be their lines or finding their character, so any distraction only adds to their discomfort. One can only sympathize with an actor who has to act around the kind of rig that appears in the image you post, whether they are on screen or off. What I will do if an actor has an issue is to rig the camera on the remote head that I carry on every production. That allows for the camera to be to the very edge of an actor's eye-line with no operator to distract. Now that I have only an electronic viewfinder to look through I do that most of the time.

Generally, I would say that it is all part of the film making process and part of an actors craft, just as much as it is part of my craft to create as comfortable environment for that actor as I can. I once had an actor suggest we just shoot without a camera, a very famous actor too, but I could never understand how that might work. Perhaps he felt his performance would exist in some metaphysical sense but I didn't want to argue that! 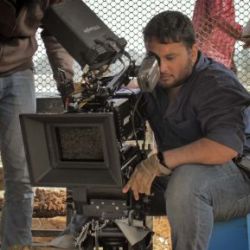 Roger, when placing the camera in between actors, how far are you willing to cheat the blocking of the offscreen actor?

For instance in the attached stills from "A Serious Man" - if Michael Stuhlbarg was placed in the rabbi's shot where we see him in his reverse...then I think we'd see at least his shoulder....right?

Both shots make perfect artistic sense, and the rabbi's eyeline is consistent so as the viewer you never question it.

But when filming my own projects, I sometimes hesitate to cheat nearly-offcamera actors' blocking much - even if clearing them out would yield a better image - for fear that some viewer might subconsciously note the inconsistency.

Thanks! (Really enjoy your podcast and these message boards) 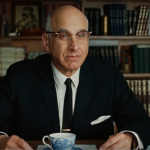 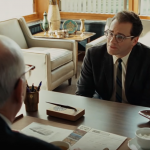 Actually, that scene was shot using the real space and you wouldn't see Michael's shoulder in the Rabbi's shot. I suspect the over is shot on a 27mm and the wide single on a 32mm, which is still wide enough to avoid the shoulder. That said, I would not hesitate to cheat where it 'felt right' to do so.

I am not sure what you mean by 'the entire Alexa'. The camera I was talking about in reference to 'A Serious Man' was a 535B Arri film camera. That was the camera I had mounted on a remote head and that remote head was not a gimbal or stabilized head but a Power Pod.

simon m replied to Opinion about color correction 18 mins ago You could use a qualifier and try to create a mask...

Reese Brucker started Episode 84 - MATTHEW LIBATIQUE - Cinematographer 41 mins ago We speak with Matty Libatique in this episode. In ...

Mike replied to Opinion about color correction 56 mins ago Compromise of the two.

Mike replied to Opinion about color correction 1 hour ago I prefer the first one as the light on the second ...

Vanniyan replied to American Beauty dance scene 2 hours ago It was shot by Connie. Not roger. Seems like you a...

Jacob W. replied to Any advice for getting better handheld shots in th... 5 hours ago Maybe try constructing a DIY steadicam? Thats what...