I hope you and James are doing well. I continue to love your podcasts.

For this scene from "Jesse James" could you possibly recall

I'm interested because although it looks like the camera might have been 10 or 12 feet away from the actors, you still have quite a shallow depth of field, which beautifully draws the eye to the actors. 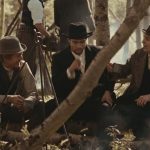 I would have been shooting at around 5.6 but the camera is also much further from the actors than you suggest as this was a relatively long lens shot.