Hey Roger,
It's my first time posting here, so first of all I wanted to say that I admire you and your work, you're truly an inspiration!

I have a question about your choice shooting 1917 with an Alexa mini LF.
What was your though process for that specific choice? What were the benefits?

I think I've listened to an interview you made about it, there you said the LF format gave you the option to shoot close ups with a 40 rather than a 32, what is the benefit of that?
Do you get less distortion if the camera stays in one position but you change focal lengths to match frame sizes?

Depends on how you define “distortion”, different lens designs have different characteristics.

So if I put a lens a foot from your face at used a wide-angle lens, your nose would look much larger than your ears because of the close distance... but if then switched to a telephoto lens, the nose would still be larger than the ears, it’s just that I would not be able to get the whole face into frame — switching to a telephoto lens would be the same as taking that wide-angle close-up and cropping it to the telephoto view in post in terms of the perspective on the face — because that was determined by how close the camera was, not the focal length.

Think about it — the distance from the ears to the nose stays constant, let’s say that’s 5 inches... but as the camera gets closer, the distance gets shorter to the nose and ears, so the relative sizes start to change... if you end up 5 inches from the nose, then the ears are twice as far away.

The larger LF sensor gave me an image quality that I felt closer to still photography. I knew we would be closely following our characters and I didn't want the distortion that even a 32mm lens would give me on a standard format and I wanted the depth of field of a longer lens. We shot almost all the film on a 40mm, which, I think, achieved the 'look' I was after. During camera testing, I felt we would shoot more of the film on a 47mm but the movement and the constricted spaces more readily lent itself to the 40mm. Of course, especially with so much night work, the extra latitude and definition of the larger sensor was not to be dismissed either.

We decided on the LF even before the camera was built. Although they had always considered a mini version of the LF from the time that the studio camera was developed, Arri didn't even have a design for it when we first approached them! Thankfully, they were brilliant. They immediately geared up their design process and produced the first two prototypes right on time.

Perspective is not determined by focal length, though individual lens designs have unique distortions to themselves and some deliberately have a less "flat" rendering of objects compared to the sides of the frame. Perspective is determined by camera position relative to the subject; focal length determines image magnification, and format determines how much of the image circle is cropped. Here is a wide shot I did last night with an iPhone (4mm lens) and a 26mm lens on a Full-Frame camera. The shots were handheld and the Full-Frame shot is an inch closer and slightly lower, affecting the perspective of the foreground slightly.  But as you can see, just because the lens on the iPhone is only 4mm, that doesn't mean it is more distorted than the 26mm lens on my Nikon. 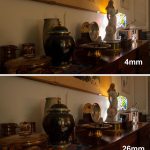 Besides the 4mm lens on an iPhone, think about the typical 8mm wide-angle lens on a Super-8 camera or a 12mm lens on a 16mm camera — none of them look super-distorted despite having very low focal-length numbers.

Sorry to be so nosey but I do like that Porcelain lady on your display cabinet. 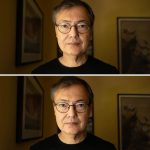 It's worth taking a look here:
http://www.yedlin.net/NerdyFilmTechStuff/MatchLensBlur.html»

Steve Yedlin: "So, even though you sometimes hear people say things like “you get a different perspective when you shoot on different sized formats.” That’s not true unless you have some sort of compulsion that makes you set up a different shot when you use a different camera model. If you shoot from the same position with the same Angle Of View, you get the same perspective*, same frame size, same vanishing lines — regardless of film-back size."

However, I'd counterbalance that again by saying that a Master Prime does not have exactly the same rendering of shapes or edge distortion as a Signature Prime (by design), and that the advantages of getting a shallower depth of field at the same f-stop and distance because the larger format uses a longer focal length remain --- plus a larger format with more resolution tends to have less noise, which gives you more ability to use higher ISOs or gives you less noise in the shadows, which enhances usable dynamic range.

Would it be fair to say that small imperfections in the glass are also less impactful when your media / sensor size is larger given their reduced comparative size? It would be interesting to see if surface uniformity is harder or easier to achieve when compared with challenges of manufacturing larger elements.

Thank you very much for the detailed explanations on this topic!
In my eyes, the most important and mysterious thing for working on the camera: to develop a feeling - from which distance (and of course angle) I use which lens (and aperture) to create a feeling/mood that is adequate to my perception of the scene/story. This is the art that distinguishes the master. Technical knowledge is very helpful. But it is important to find your own intuition - the magic process :).
So thank you again for your thoughts on this.

Feelings and intuition are important in art, yes. Just as long as feelings aren’t used to deny science because in this day and age, that can be a problem...

I thought your edit function has been restored, obviously not.

Thanks for your detailed response David. For someone like me with not the experience that you and Roger have, the comparative images you posted really show your point. And it's so practically helpful. cheers.

1
2
Next
Back to Camera...
Recent Forum Posts

Baudelaire replied to Electra Glide in Blue 10 hours ago Yes , i remember watching it over 20 years ago, i ...

dmullenasc replied to Electra Glide in Blue 13 hours ago I heard a story that Conrad Hall felt that scenes ...

pbwinters replied to Electra Glide in Blue 18 hours ago I love that one also.

Roger Deakins replied to Electra Glide in Blue 20 hours ago A good film. I loved that film. Many of the smalle...

Roger Deakins replied to How do you all learn and grow from your mistakes? 20 hours ago That sounds like a Claude Lelouch film to me, &#03...

Roger Deakins replied to Supreme prime radiance for flare 21 hours ago I rarely like flares in a shot as I find it almost...

Jay Young started Judging exposure underwater 24 hours ago I was speaking last night with another cinematogra...

Frank replied to The shining: lens choice 1 day ago The very set of Zeiss Super Speeds used in the pro...
Top Forum Posters