came across this, just love it. (8 replies and 16 comments) 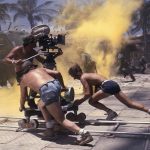 These are a rare species. Nice action photo too.

Could that be a Francis Ford Coppola Film?

Appears to be a military film of some kind Mike... did FFC ever shoot one of those?! Also do they make dolly grips like that anymore?

Looks like “Apocalypse now” Is the film.
“Vinton” UK Still make dolley’s although mostly now modify older cast alloy types.
Although, cameras have become lighter they still have to take the weight of the operator which is why the older types are still in use. They were built to last a life time.

Amazing insight on the actual dolly Mike... I was more so speaking of the shirtless Dolly Grips and Op's without any kind of protective anything running and gunning... haha.

Yes  apocalypse now , my apologies  forgot to add. great info on the dolleys.

Movieola USA made superb dolleys many of which are still in use around the world.
There were dozens of firms manufacturing Dolleys all shapes and sizes in the 1950/1960’s But only a handful stood the test of time. USA, UK, Italy were the leaders at the time and even “Miller” Of Australia tried their luck but eventually settled for Heads and tripods. Now “Miller” leads the world in tripod heads superseding Ronford Baker, O’Connor etc.  BBC UK Have now replaced all their tripod heads with Miller ones. My personal choice is Ronford Baker, over engineered but lasts forever!

I am hoping to Write/ complete a book on film equipment from the early days to present but It’s taking forever to collate, never enough hours in the day. 10 years ago I was compiling a history of film studios so may have to combine the subject into one. Time will tell.

It looks like a simple Elemac dolly to me and the camera is an Arri 35 11C. Much of the film was shot with an Arri BL. I shot a film in Thailand called 'Air America' and the crew dress code was almost a match as was the gear.

Are you privy to refer to those as the 'good ole' days' or is it yet to be decided?

Looks like an Arri 11 with the power cable connected to the motor underneath.
They also used an Arri BL, Mitchell and 11c. It seems.

No way! I would never refer to those as 'good ole days'. I had a lousy time on 'Air America' and I almost gave up the film business after that shoot. Then I got a call from the Coen Brothers.

“Air America” best film Roger made, although “Shawshank” comes In second imo.
“Skyfall” is the best Bond film ever, Direction, photography at its best, although I don’t think they got the best out of Daniel. They could have “tweaked” him a bit
more. Imo.

haha. can't wait for when this story finally comes out (preferably as a 2 part netflix special with Chris Pine playing the part of Roger)

Bare chested crew. “Boom” “Lawrence” and Arri 11 “Apocalypes Now”. Those boxes are held on the chopper with bits of rope. 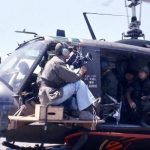 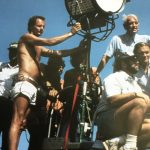 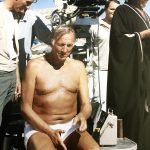 That middle shot shot shows the little known fact of how Bill Murray got his start as a gaffer's assistant!

Hey Mike - sorry mate, just having a bit of fun. Totally joking. I was struck by how much that man operating the light looked like Bill Murray.

Oh I see. No problem. Yes, he does look like him.

This thread has  gone well sexy.

The new age of Dolly Grips... this was in May in New Mexico. Not a bare chest in sight. And that camera was an Alexa Mini... 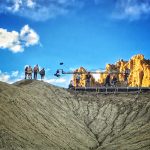 How close should a cameraman get?

Btw, Her bikini is made from a newspaper which seems to be ‘news worthy‘!  Can’t wait for her to take a dip.

Note the cufflinks worn by the cameraman, don’t get that anymore. 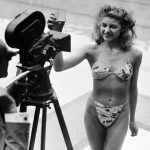 Roger Deakins replied to Discovering shots on the day 8 hours ago The 'found' shot may replace anything th...

Roger Deakins replied to Enjoyable ways of working with a director 8 hours ago Yes, it was a little disturbing to be asked if I h...

Roger Deakins replied to How do you deal with a director who believes incor... 8 hours ago I think it can only help another person to speak t...

Roger Deakins replied to Lighting Separation and Color Separation! 8 hours ago Separation can be achieved by color contrast as we...

TWSILK replied to How do you deal with a director who believes incor... 9 hours ago Like Mike is basically saying is the "customer&#03...

Mike replied to How do you deal with a director who believes incor... 13 hours ago If your Director employed you then I suggest you s...

Hugo_will replied to Cinematographer Steve Yedlin? 14 hours ago Yes, please have Steve Yedlin as your guest.

Vanniyan replied to The cranes are flying 14 hours ago Master roger how did they follow stair case scene....