Amazing work in shooting 1917! I just saw the movie at the Imax cinema, Melbourne, Australia. I have a few questions regarding shooting with the Arri Alexa Mini LF.

I noticed there are a few long whipped type pans that look a bit unnatural for a camera to produce. It looks as if the shot had some morph cut transition effect. Is that a camera thing or a post thing to cover a cut?

For the scene where two British soldiers receive their orders by the general. Was the scene just lit by practical light only? How does the Arri Alexa Mini LF perform in low-light conditions? I sometimes noticed there's a bit of digital colour grade noise on the soldier/general uniform.

Bonus question! For the Devonshire battle scene. I noticed the trenches were white or bright in colour compared the earlier trenches that's grittier and darker. Is that a stylistic choice? Story choice? Or just that's how it is when trenches were made in that location?

Mike
5 days ago
Mike 5 days ago

Location was Hankley common, Borders of Surrey England.
White stuff in trenches is chalk! The location was where the original WW1 tanks were tested and every tank since. Very historic site. Some scenes in Skyfall also filmed there. 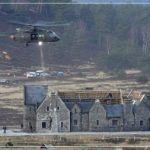 Incorrect entry. Trench scenes were Salisbury Plain although early scenes were at Hemel Hempstead. Sorry about that.

Sorry, Mike! We did not film '1917' at Hankley Common. The early trenches clay were dug at a location near Hemmel Hempstead. The white chalk trenches were on Salisbury Plain. We has scouted some preserved WW1 trenches in France and Sam felt the white of the chalk trenches we saw there would create an interesting contrast for our last battle sequence.

The pans were as produced 'in camera' but there was a blend in the two that I can think of.

Yes, the bunker was lit by the oil lamps alone but the oil lamps held 500 watt bulbs rather than a live flame. These were dimmed down to produce the warm color you see. I was shooting at 2.0 and rated the camera at 1600 ASA for these scenes. That is why there was some increase in the noise level, which is visible in IMAX, but I felt this was acceptable given the way the scene had to be lit. I tested the Alexa LF at 3200 ASA and found the image quite acceptable but, again, there is an increase in noise level.

Thankyou Roger.
I thought it was Salisbury Plain but “Film locations.com” stated otherwise. Obviously, can’t trust what they print.

Thanks Rodger for replying. Watching 1917 at an IMAX cinema is an amazing experience! It really felt like I was actually following the characters from behind. I guess because the IMAX screen is so big, any visible noise levels would be bigger or more noticeable.

Also well done choreographing the flare lighting! It's like fireworks meet theatre performance show. It really inspires me to integrate scene blocking and lighting together in the films I shoot. I look forward to seeing your next masterpiece!

It's funny, I recently looked back at a film I shot on 500T years ago and the 35mm grain was so distracting that I could have sworn it was shot on slow Super-16 stock if I didn't know better. I'm sure the noise level at 1600 looks just fine in IMAX 🙂

Obviously not! (to Mike)

Yes, a while ago I did some tests with the lenses I used between the year 1984 and 2000. I used to love those lenses but now I can't believe I shot with them!

May I ask why you don't like them anymore? What are the main qualities of a lens you value now?

The Byre
3 days ago
The Byre 3 days ago

The technical quality of the image in 1917 was noticeably better than any film I have seen so far anywhere.

I hear that the box-office is expected to go well over $100m this weekend.  A very deserved success for all concerned!

The older lenses (I am talking about the Zeiss Distagon and Planar lens sets) are not nearly as sharp and they also suffer from more flaring than either the Master Primes or the Signature primes.

Roger Deakins replied to Saturated orange silhouette look 1 hour ago When you dim a tungsten lamp to around 25 - 30% it...

sydneydan replied to Lighting Day interiors - Why choosing big fixtures... 7 hours ago Thanks a lot for the informative Answer 🙂

Mike replied to Finding your own style in photography 11 hours ago Lenkiewicz was famous for using lots of light in h...

Volker M. Schmidt replied to Creating Smoke/Fog without a machine 13 hours ago When I was still working in a theatre, we were als...
Do NOT follow this link or you will be banned from the site! Scroll Up