Dear master roger i. Learning lot from you. Thanks for giving this amazing opportunity through your website's. I was hearing joel coen and your conversation podcast at last night. Joel talked about a place in the sun birthday scene shot constructions. He used 'counter intuitive'. What is counter intuitive in film language. I also watched that movie after heard the podcast. Shelly winters waiting for montgomery. Because she wanted celebrate his birthday. But he went to his uncle house and met angela Vickers and got affair also. He came back to shelly winters house. She is very upset. He is hiding all that matters. Right there is very emotional scene going on there. But george Stevens never cut to her face. I can't understand this area. Why did he do that scene from her OTS?I felt the purpose of the Shelly winters ots May be she doesn't know what is going on him. Is that the reason Or audience want observing from Shelly winters perspective.if my guess totally wrong please correct me. 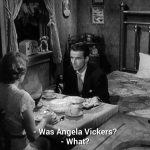 I will have to study the film. Maybe someone else has seen it recently.

Thanks for reply roger. I did think you have watched already.if anyone seen it share your thoughts guys.

Hello. I am a director and a huge fan of your work Roger. Thanks a lot for your podcasts.
Regarding A place in the sun. The same it happened to me. As soon as I finished to hear the great episode with Joel Coen (maybe one of the best for me) I sat and watch A place in the sun again. I am also intrigued by that approach to the scene. I think the only one who had the right answer was George Stevens. But here goes my little input. The whole scene reminds me a police interrogation (you know those high camera angles that you can see in many documentaries). Montgomery Cliff character feel guilty, he is the one that have to explain things, the one that is hiding. Is the one that will change during the scene. And showing him only is, in a way, to be in her's point of view. We know the facts now we will "see" the confession. Maybe is this or maybe not. But anyway the interpretation of the art is more on the side of the beholder. saludos a todos

I loved 'Gunga Din' when I was very young and I watched 'Giant' a number of times, when it was on TV late at night and my father allowed me to stay up.

Thanks for your valuable time master roger. I need to ask few questions about 'A place in the sun'. Don't mistake me in not forcring to watch that movie. Really i don't know anybody who knows about strong shot construction and george steven movies. Anyway I would like to ask this scene composition. Vickers angela father wants to speak with george Eastman privately about his family baground. He called through his manager and then talk with george Eastman. George Eastman, angela falls in love with each other. So george Eastman explain about his family real baground. He is basically poor and uneducated. But he wanted richer life himself.

But I can't figure out why this composition made by george Stevens. Because most of the shots they both not speak an eye to eye. There is lamp in the center frame. I feel the lamp separated each other. What's your idea when you see his composition master roger 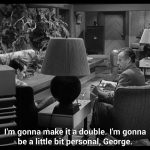 dmullenasc replied to LF on 1917 11 mins ago Think of it this way, if nothing moves, the distan...

dmullenasc replied to LF on 1917 16 hours ago However, I'd counterbalance that again by say...
Top Forum Posters