I Roger, I am a French student and I am currently writing a thesis on stabilization. I am talking about 1917. I have a question that remains unanswered (I can’t get in touch with Pete Cavaciuti). On the Dragonfly system (Stabileye +Gyro), on the making of photos and video, I saw that there was a Volt on the Dragonfly Sled and I would like to know if it was activated?

Do you know which scene you mean. If the Volt was attached then it was probably activated, although as you know the Volt does not have to be used, it all depends on the scene. I understand, that there were a number of stabilising systems used on 1917, do you have a photo of the system in use for us to look at. The Volt can be positioned anywhere on the Rig providing it is above the sled ie, above center of gravity. It is basically a mini computer that can memorise camera positions using servo motors to stabilise the selected positions. Very clever design but well established in the military, a similar system is used in Tanks to stabilise gun motion and even in ship stabilisation. Aircraft also use a similar system for navigation and auto pilot. 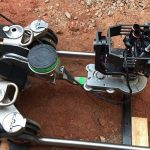 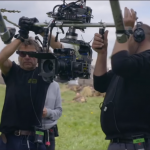 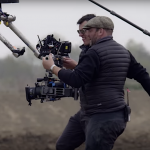 In this photo, we can see Pete with the Dragonfly. The Dragonfly is composed of the Steadicam, the Brushless Gimbal Stabileye on the Top, an anti-vibration mount between the Top Stage and the Stabileye, and we can see at the bottom of the Sled a Gyro. I see that on this shot, the Volt is placed around the gimbal, and I know that the Volt can be activated or us at the push of a button. I would like to know if Pete activated the Volt. Isn’t that too much? Volt + Gyro + Brushless Gimbal? 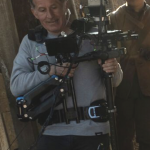 The photo shows Petes left hand underneath the gimbal and his right hand controlling the angle of the camera. This looks like an earlier version of Steadicam. Transmitters are on top. If Pete activated the Volt or not, would this change the line of questioning. If you analysed the footage he actually shot would you notice any difference whether he switched it on or off. I am intrigued why you need that information.
Just interested to know, that’s all.

The 'Dragonfly' utilized a shorter post than on the conventional Steadicam so it needed a bottom weight to balance the rig with the camera. This was why the Gyro worked in the low position, whether it was running or not. We had tested running both the Gyro and Volt running together, but I remember Pete sometimes turning off the gyro and using the Volt by itself. Frankly, we did so many tests with so many combinations that I can't remember exactly what we used on each 'shot'.

Mike replied to Opinion about color correction 7 mins ago Compromise of the two.

Mike replied to Opinion about color correction 12 mins ago I prefer the first one as the light on the second ...

Vanniyan replied to American Beauty dance scene 48 mins ago It was shot by Connie. Not roger. Seems like you a...

Ricki-Minaj replied to The color temperature change? 1 hour ago Hi! I think you should have no problems. You will ...

Jacob W. replied to Any advice for getting better handheld shots in th... 4 hours ago Maybe try constructing a DIY steadicam? Thats what...

fukuichi started The color temperature change? 4 hours ago Hello Roger and everyone! I have a question. I sho...